Takeda Pharmaceutical’s (Takeda) hiring patterns show a continuous decline to 2,572 in Q2 2020 from 2,986 in Q1 – a whole 13.9% decrease – with a continued downward trend in Q3. However, despite this overall fall, postings in roles related to rare or niche diseases are progressing at a measured pace, finds GlobalData, a leading data and analytics company. 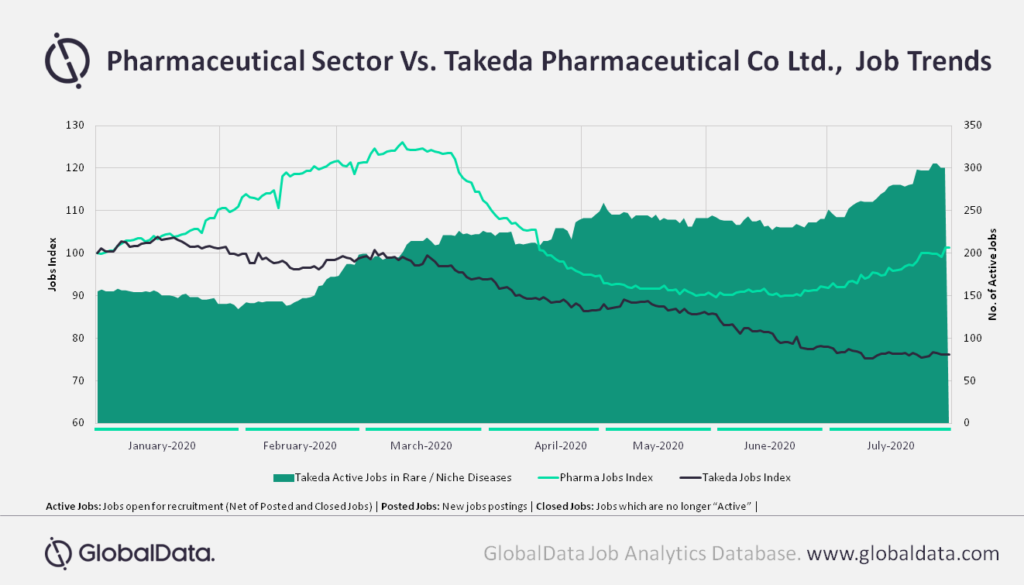 Aurojyoti Bose, Lead Analyst at GlobalData, comments: “Takeda’s drop in hiring in Q2 versus Q1 was in line with trends in the pharmaceutical industry at large, which witnessed notable index decline in the Q2. However, the industry has seen a resurgence in Q3 so far, whereas Takeda has now fallen out of step with the trend.”

Peter Shapiro, Senior Director of Drugs at GlobalData, comments: This is likely due to offset after its Shire acquisition in 2019 added sizeable debt. While this is not crisis-mode, as it is expected and normal that there would be a massive redundancy after buying a 30-year-old company, Takeda will be looking to save costs and make additional divestments of non-core businesses and rightsizing of its global operations staff in the remainder of Q3 and beyond. For example, they currently have two US HQ: one outside of Boston and one outside of Chicago that are both going to need to combine and move to Cambridge, Massachusetts.”

Bose adds: “Takeda remains focused on rare/niche diseases, gastroenterology, oncology, neuroscience, with job postings in rare/niche diseases showing a gradual increase from 97 in February to 145 in March, and further growing to 177 in July 2020. Several areas with relevance to the COVID-19 pandemic are witnessing renewed interest in the pharmaceutical industry.”

Shapiro adds: “Takeda should be focusing its resources on the aspects of Shire that made it appealing to purchase in the first place: an innovative drug pipeline with rare disease focused and existing drug franchises that were selling well in the US.”