Significant incentives mean that Russia’s major gas producers, Gazprom and Novatek, are better positioned than many of their peers in terms of their future tax burden, according to GlobalData, a leading data and analytics company.

The company’s latest thematic research report: ‘Taxation in Oil and Gas’ reveals a high degree of variation in the upstream fiscal regimes and tax burdens faced by leading integrated and independent oil and gas producers. Novatek faces the lowest burden among leading independents, while Gazprom places third among the top 15 integrated producers for lowest remaining fiscal take (the percentage of future field cash flows allocated to the government through royalties, production shares and other taxes).

Will Scargill, Senior Oil and Gas Analyst for GlobalData commented: “Although Russia’s standard fiscal terms rank among the toughest in the world, the government has offered massive tax breaks for major projects. Among the biggest beneficiaries are new fields in the North of the Yamalo-Nenets region, which will provide gas to support Novatek’s LNG projects and Gazprom’s exports to Europe.” 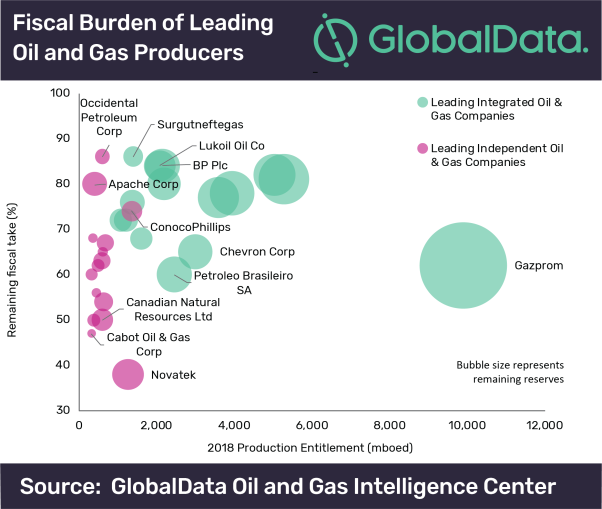 Major oil and gas taxation trends such as incentives for gas projects and intergovernmental corporate tax competition will be crucial to future value creation for oil and gas producers.

Scargill adds: “The 2018 US tax reform means that US-focused producers generally face more favorable fiscal terms than peers who are more internationally diversified. Notably, Chevron appears best placed among the supermajors due to its increased focus on the US and lower exposure to higher-tax areas. However, such tax advantages do have to be balanced against other factors such as cost and resource availability.”

An early flurry of final investment decisions kicks off more promising year for upstream oil and gas across EMEA
NEO Energy to become a top ten producer in the UK with ExxonMobil North Sea deal
US dominates upcoming oil and gas project starts in North America by 2025
Little prospect of post-COVID-19 rebound for BP’s oil and gas investments
North America’s O&G trunk/transmission pipeline to be almost twice as long as FSU by 2024 as the region continues to lead global pipeline length additions, says GlobalData