Even though cash remains the preferred mode of payment in Thailand, its share in the country is on a gradual decline due to the concerted efforts by the government to promote electronic payments under its National e-Payment Master Plan, according to GlobalData, a leading data and analytics company.

Nikhil Reddy, Payments Analyst at GlobalData, comments: “The government’s attempts to promote non-cash payments such as the introduction of faster payments and QR codes, mandatory issuance of EMV cards and push for point-of-sale (POS) adoption are contributing to the growth of electronic payments.” 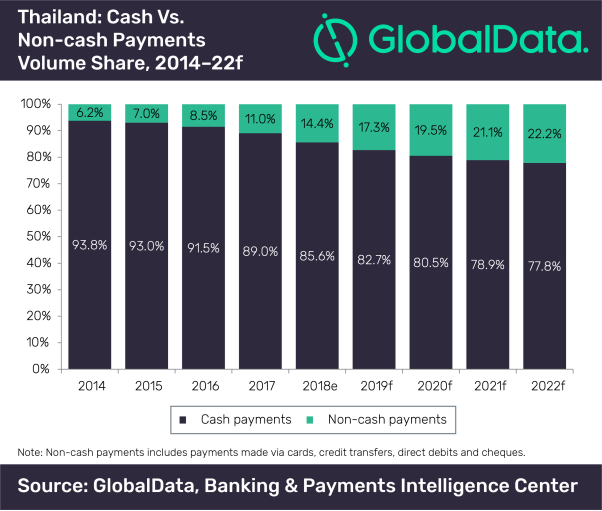 As part of the National e-Payment Master Plan, the Thai government launched a nationwide program in 2017 to drive POS installation among smaller retailers and government agencies. Merchants were offered benefits such as tax deduction, fee waivers on POS issuance and rental, and a cut down on merchant discount rates.

In 2016, the Bank of Thailand launched a faster payment system, PromptPay, allowing users to make peer-to-peer transfers and payments through their mobile phone using only the recipient’s mobile number or national ID number. As of December 2018, 46.5 million users, over half of the country’s population, had registered for the system.

Reddy concludes: “Though cash will continue to remain dominant in Thailand, these measures will certainly propel electronic payments, thereby further reduce the usage of cash over the next five years.”