Thermal power to remain most significant source in Malaysia during 2019–2030, says GlobalData

16 May 2019
Thermal power to remain most significant source in Malaysia during 2019–2030, says GlobalData

Thermal power capacity in Malaysia is expected to show a significant growth of 5 GW during 2019–2030 in order to meet the increasing consumption, and non-hydro renewable power is estimated to follow with a 2.8 GW capacity addition during this period, according to GlobalData, a leading data and analytics company.

GlobalData’s latest report, ‘Malaysia Power Market Outlook to 2030, Update 2019 – Market Trends, Regulations, and Competitive Landscape’, reveals that due to an immature renewable power market and strong public resistance to the proposed adoption of nuclear power, the country will continue to embrace thermal power during 2019–2030 while also adding small amounts of renewable power capacity each year.

Harshavardhan Reddy Nagatham, Power Analyst at GlobalData, comments: “Progressive economic reforms and a continuous increase in industrial activity are expected to boost economic progress in Malaysia, driving the country’s GDP at a compound annual growth rate (CAGR) of 4.8% during the forecast period. In addition, increasing population will result in a significant increase in electricity consumption.”

Malaysia is a net importer of electricity. The country is primarily dependent on thermal resources for electricity generation and, although it possesses substantial fuel reserves, it faces the risk of declining energy security.

As of 2018, gas-fired thermal power dominated the country’s power portfolio, with a share of 43% of the total installed capacity. Coal and oil followed with a share of 30.4% and 5.9%, respectively. While hydropower held a 17.2% share, other renewables together accounted for less than 4% of the total capacity. 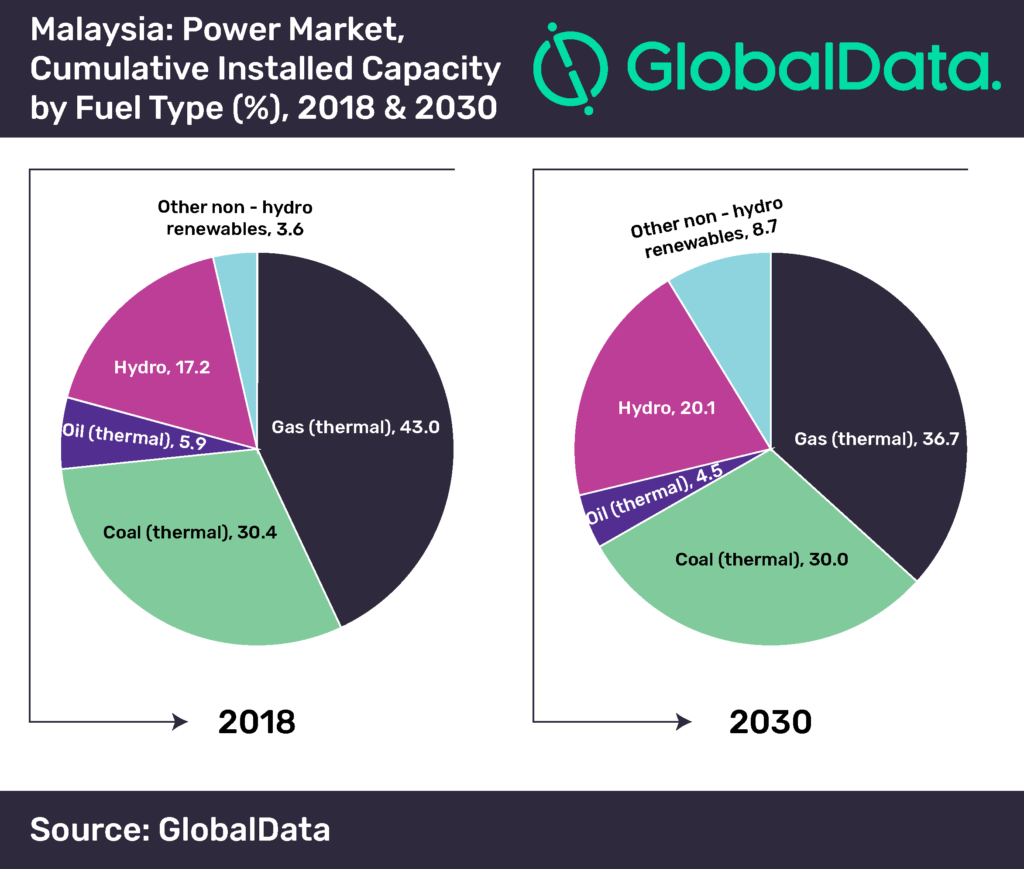 The government had considered adopting nuclear power in order to establish energy independence and at the same time avoid greenhouse gas (GHG) emissions. The government also set up a Nuclear Power Development Steering Committee and deployed three working groups to plan and co-ordinate the development of nuclear power.

However, due to wide public resistance over the idea, the plans did not materialize and may not see traction anytime soon. This leaves renewable power as the only other option to generate electricity without increasing GHG emissions.

Nagatham concludes: “Despite the growth in the share of renewable power in Malaysia, the country will continue to embrace and develop its thermal power capacity in order to meet the growing demand for electricity.”