Many pharmaceutical companies have performed well, despite the impact of COVID-19, as all of the top 20 global innovative bio/pharma companies, ranked by market capitalization (MCap), reported an increase in MCap for the quarter ended 30 June 2020 (Q2 2020).

As a whole, the group reported an increase of 10.2% with an aggregate MCap of $2.8 trillion – as compared to the quarter ended 31 March 2020 (Q1 2020). Johnson & Johnson maintained its top position with a MCap growth of 7.2% on a quarter-on-quarter (QoQ) basis, while ten companies in the list reported double digit growth in their Mcap – with the top five players retaining their positions from Q1.” 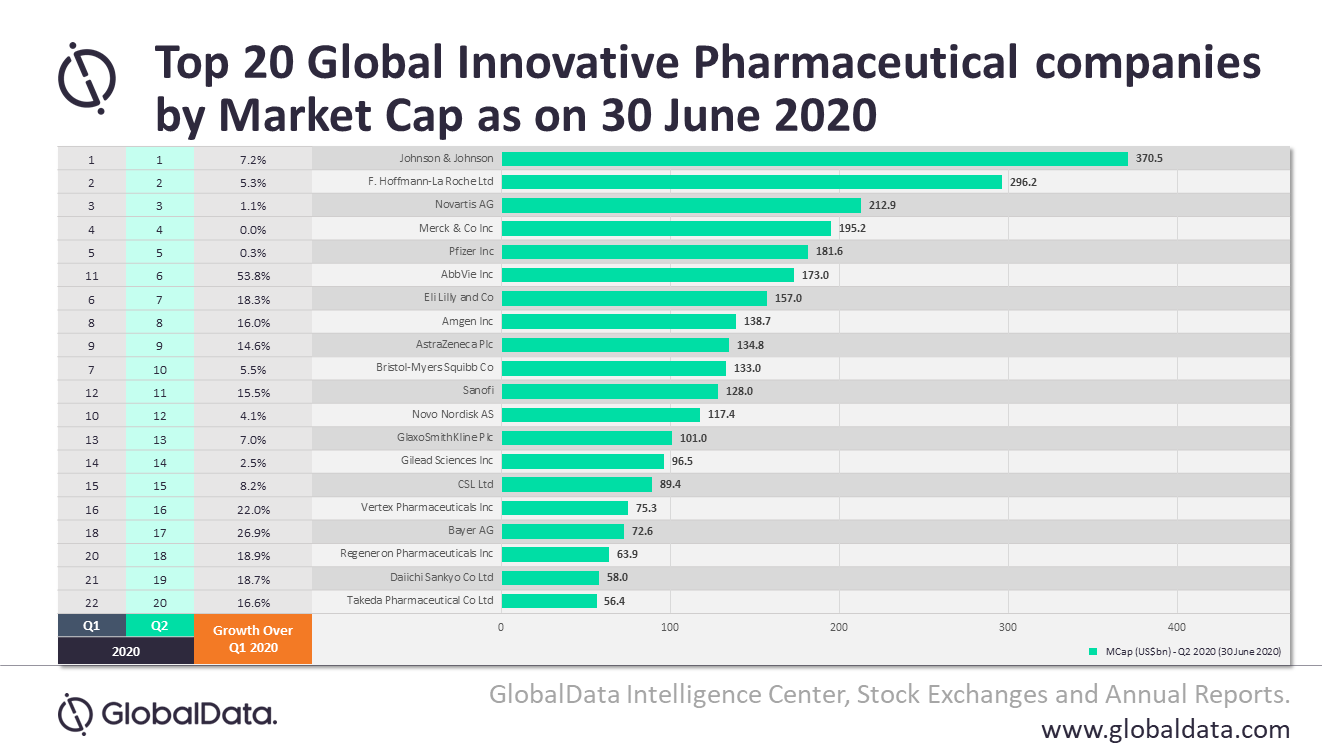 AbbVie moved to sixth position, with a MCap growth of more than $60bn (up 53.8%) in Q2, fueled by its recent Allergan acquisition, which has expanded its drugs portfolio.

Madeleine Roche, Associate Analyst of Business Fundamentals at GlobalData, comments: “The Allergan acquisition allowed AbbVie to diversify its portfolio and increased its stake in wider-ranging therapeutic markets such as immunology and neuroscience.”

Bayer (26.9%) and Vertex Pharmaceuticals (22%) reported more than 20% growth in MCap during the quarter. Bayer’s share price increased in Q2, buoyed by the series of agreements it signed to resolve major outstanding Monsanto litigations. Vertex’s MCap continued its upward trajectory in Q2 – primarily due to its dominance of the cystic fibrosis (CF) therapeutic space.

Roche adds: “Trikafta’s hold of the CF market share, thanks to its efficacy and larger patient demographic, contributed significantly to Vertex’s 62% increase in product revenues since last quarter.”

As for Japanese Bio/Pharma companies, Daiichi Sankyo Co and Takeda Pharmaceutical Co are the new entrants in the Top 20, with an MCap growth of 18.7% and 16.6%, respectively, in Q2. Daiichi Sankyo’s potential oncology drugs candidates and clinical trial collaborations were instrumental it’s the MCap growth during Q2.

Roche adds: “Takeda’s strong performance was thanks to increased sales of top oncology and rare disease assets such as Takhzyro (lanadelumab) and Ninlaro (ixazomib). Takeda’s growth in oncology continues with pipeline assets such as its small molecule pevonedistat hydrochloride, which was granted breakthrough therapy designation by the FDA in July 2020.”

Alhough the top five players retained the same position in the list as compared to Q1, Novartis, Merck & Co and Pfizer reported only nominal growth in their MCap in Q2.