Low value deals (investment <=$10m) accounted for the majority of venture capital (VC) investments in the payment tech space in volume terms during 2018. However, the top 20 deals contributed more than 80% of total deal value during 2018, according to GlobalData, a leading data and analytics company.

The number of VC deals with value up to $10m accounted for 57% share in the payment tech deal volume in 2018. In total, 139 such deals worth $516.8m took place during the year. GlobalData’s analysis further reveals that the highest number of deals was executed in the deal value range of $1m-$5m during 2018. All the four quarters also featured maximum number of deals in this range.

A total of 55 deals with a combined deal value of ~$1bn were announced in the first quarter of 2018. Around 65% of the deals were less than or equivalent to the value of $10m while only two deals with value higher than $100m were announced during the period. The top 20 deals accounted for ~88% of total deal value in the quarter. 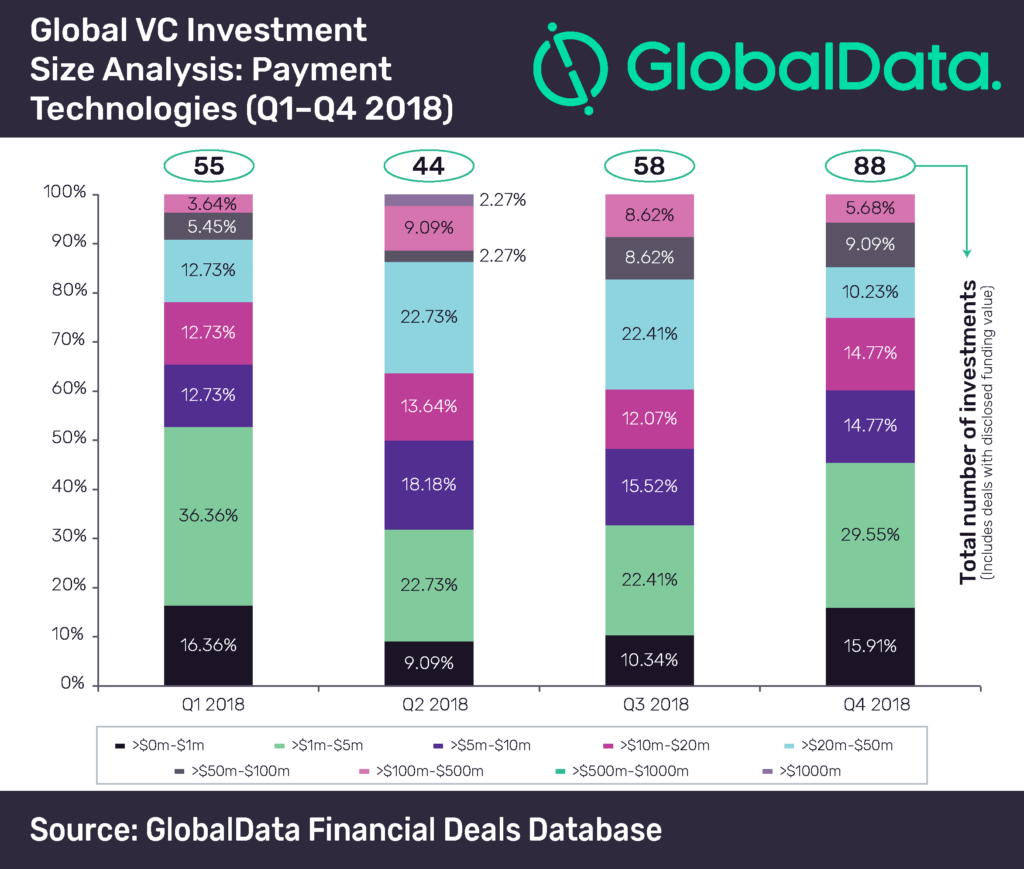 Despite deal volume shrinking by 20% in the second quarter, the combined deal value soared to $15.5bn, driven by the $14bn funding raised by the Chinese payments major, Ant Financial. All other deals during the quarter had deal value less than $500m; 22 deals were valued less than or equivalent to the $10m.

Deal volume recovered and increased in both the third and fourth quarters of 2018. Among all the quarters, the fourth quarter witnessed the highest number of deals, wherein 88 deals were announced with an average disclosed deal size of $23.8m. About 60% of the deals had value less than or equivalent to $10m in Q4. With seven deals valued more than $100m, the top 20 deals accounted for ~80% of total deal value during the period.

Aurojyoti Bose, Financial Deals Analyst at GlobalData, comments: “Some of the big ticket deals by VC firms in the recent past, such as the Ant Financial one, suggest that these firms are ready to make big bets in the payment tech space. Companies with innovative ideas/products in payment tech space have been able to attract big checks from VC firms.”