The top 25 technology* companies’ cumulative market capitalization (MCap) hit $11.1 trillion as of 30 September 2020, adding a whopping $1.3 trillion in the third quarter (Q3) of 2020 alone. Apple unsurprisingly continues to top the chart, gaining MCap of over 25% in Q3. 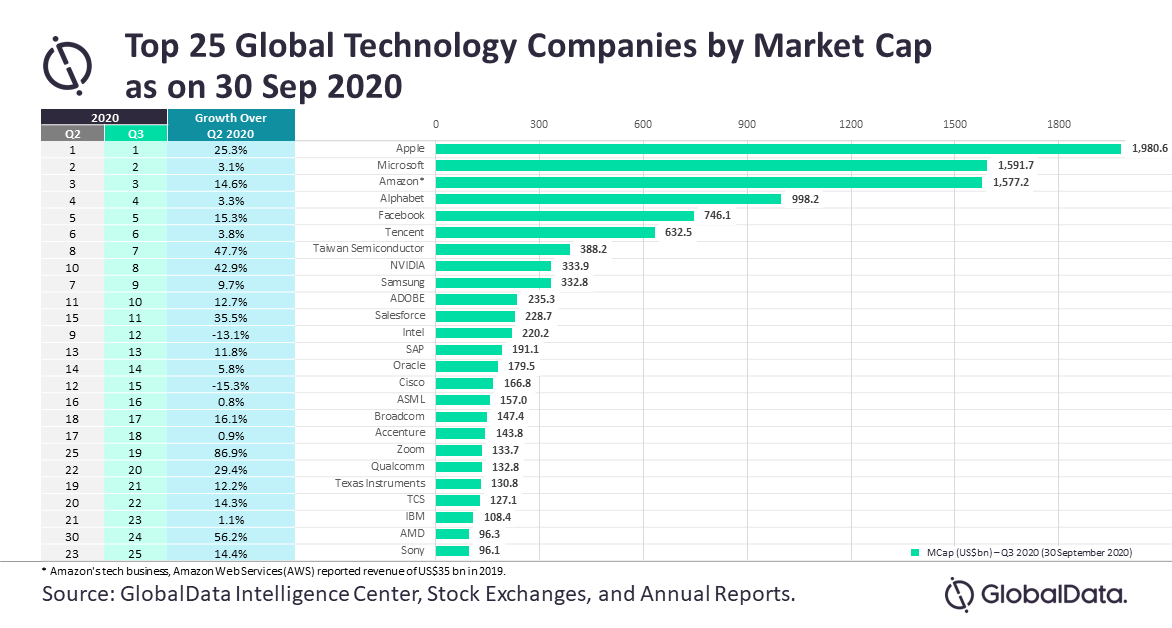 Other companies with over $1 trillion of MCap in the top 25 league by MCap were the cloud computing leaders, Microsoft and Amazon.

By the end of Q3, Alphabet was less than $2bn away from becoming the fourth technology company to hit $1 trillion MCap mark. The company’s stocks surged over 10% in August, but fell by 11.5% in September.

Jha adds: “The 5G wireless networks, Artificial Intelligence (AI) and deep learning, memory and foundry, data center, autonomous vehicles and gaming are the major areas where these semiconductor companies invest to look for growth in the future. Investors also seemed convinced about their growth plan, which is evident from the surge in their stock prices.”

Intel and Cisco were the only two companies in the top technology list reporting decline in their QoQ MCap. Despite strong Q2 sales growth achieved by cloud, notebook, memory and 5G products, Intel’s announcement in July that its next generation of 7nm chips were 12 months behind schedule didn’t go down well with investors and its stock tumbled over 18% in July.

Cisco’s weaker earnings in Q3 and Q4, as well as its soft revenue forecast, led to over 10% decline in stock prices in August and 6% decline in September.

Jha concludes: “With COVID-19 challenges still prevalent across major global economies, the demand for digital transformation is eminent to streamline production and supply chain processes. As there is no immediate end to the pandemic in sight, tech companies will be helping organizations and partners securely access and share data while working remotely.”