Total prevalent cases of female infertility to decline to 13.4 million in 2028

The total prevalent cases of female infertility in the seven major markets (7MM*) combined are expected to decrease from 13.8 million cases in 2018 to 13.4 million cases in 2028, equating to a negative annual growth rate (AGR) of 0.31%, according to GlobalData, a leading data and analytics company.

The company’s latest report: ‘Female Infertility – Epidemiology Forecast to 2028’ reveals that this is due to the decline in the reproductive age for women in the 7MM combined. 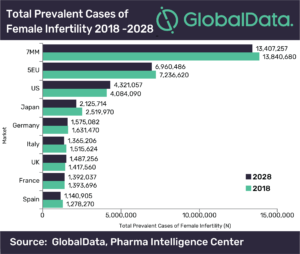 The US is expected to see the highest growth of total prevalent cases of female infertility at a positive AGR of 0.58% during the forecast period, followed by the UK with an AGR of 0.49%. However, the remaining countries – France, Germany, Italy, Spain and Japan – have negative AGRs to 2028.

‘’In the US and the UK the population of women at reproduction age is increasing whereas in the remaining countries it is decreasing’’.

Infertility is a disease of the reproductive system characterized by the failure to achieve a clinical pregnancy after 12 or more months of regular unprotected sexual intercourse. A considerable proportion of women experience infertility and the inability to bear children is a devastating condition for many couples, bringing a sense of loss, psychological distress, depression, and low self-esteem.

Multiple factors have been identified as possible contributors to fertility problems in women, including socio-demographic, behavioral, physical, and mental health conditions. Some risk factors affecting fertility cannot be changed, while others such as life style choices may be altered.

Arunkumar NV concludes: ‘’Many of the behavioral factors and health conditions may be preventable, such as smoking, obesity, and diabetes. Although infertility is more prevalent in recent times, the use of advanced assisted reproductive technologies in modern medicine greatly increase the chances of solving infertility problems’’.