In a recent survey of global healthcare professionals into the impact of Brexit on the Pharma industry, most participants working for UK-headquartered companies did not expect staff relocation’s because of Brexit.

The survey by GlobalData, a leading data and analytics company, is featured in the company’s latest report; ‘Brexit and the Healthcare Industry – Implications for Pharma, Q1 2018’ which provides an assessment of how the pharmaceutical industry expects Brexit to affect the healthcare sector, both within and outside of Britain. 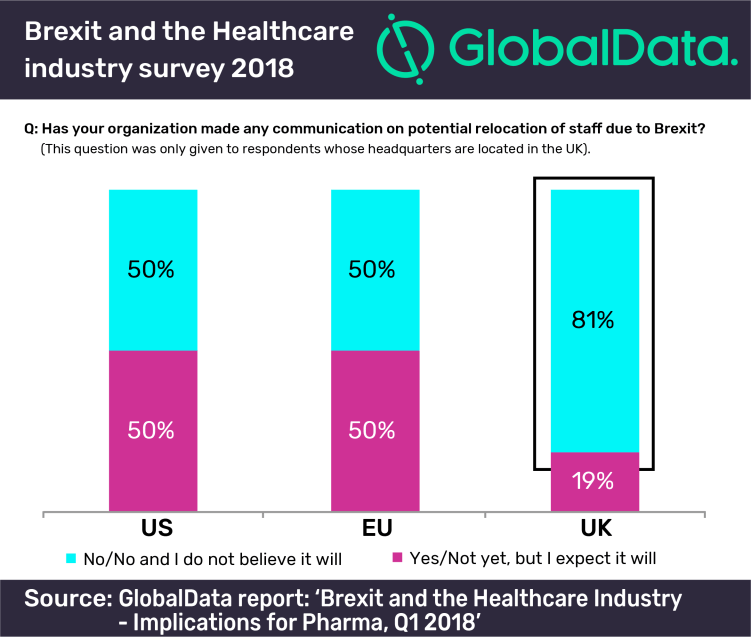 When UK-based respondents were asked whether their company had made any communication on potential staff relocation after Brexit, 81% answered ‘No’ or ‘No and I do not believe it will’.

Thomas Moore, Healthcare Analyst at GlobalData, comments: “The results from our survey suggest that the majority of those working in the UK pharmaceuticals sector do not expect any staff relocation after Brexit, with only 19% saying that they expect staff to be affected and 7% saying they expected their company headquarters to leave the UK after Brexit. However, participants based in the US and EU were much more likely to expect staff relocation, with 50% of participants from these regions answering either ‘Yes’ or ‘Not yet, but I expect it will’ to the same question.’’

The pharmaceuticals industry is one of the most dynamic in the UK. GlobalData estimates that in 2017, UK-headquartered companies generated a total of $87.5B (£64.9B) in global sales, of which approximately 80% was accounted for by GlaxoSmithKline and AstraZeneca. A small reduction in the size of the sector could therefore have significant effects on the UK economy. GlobalData believes it is important to understand and anticipate these changes as much as possible to help the UK pharmaceuticals sector remain strong post-Brexit.

Moore continues: “Results from our survey also suggest that the uncertainty over the final Brexit deal is the driving factor behind any changes in corporate strategy so far due to Brexit. Approximately half of all survey participants said that Brexit had affected their company’s corporate strategy, with the most common reason being having to invest resources into managing the potential outcomes of Brexit.”