The UK government has aims to build a full-fiber network connecting 15 million premises by 2025 and to deliver nationwide fiber-to-the-premises (FTTP) by 2033. It plans to do this by promoting investment and encouraging a competitive environment for fiber deployment and infrastructure. Full-fiber in the UK is needed to support consumers’ growing dependence and demand for data-intensive services such as video content streaming, according to GlobalData, a leading data and analytics company.

GlobalData’s latest report, ‘United Kingdom: Telecom Operators Country Intelligence Report’, reveals that around 8% of UK premises have access to full-fiber connections. Additionally, the UK’s proportion of fiber as a percentage of all fixed technologies, will grow from 3% in 2019 to 13% by 2024.

Jonathan Bachrach, Senior Telecoms Analyst at GlobalData, commented: “The government wishes to avoid a case where data demand outstrips capacity on existing broadband networks. In fact, it was reported by Sky News that the BT Group and other local broadband players are in talks with the government for a copper broadband switch-off. It is expected that the final switch-off deadline could potentially take place by 2027 under a staggered approach.” 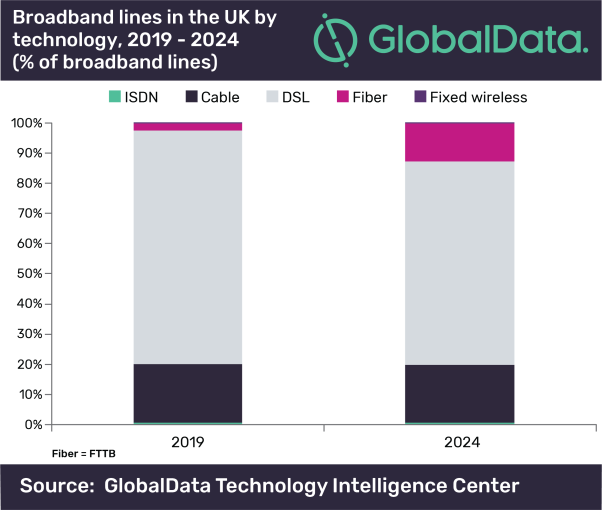 Bachrach adds: ‘‘Fiber infrastructure is important to increase data capacity in the UK as it not only boosts the fixed broadband bandwidth, but it also supports 5G growth. This is because the backhaul – the connection between the mobile mast and core network – is often provided by fiber cables and can help the data-heavy volumes of the 5G network.’’

In line with the goal of delivering high-speed fixed broadband, several operators are investing heavily in fiber.

Recently, Openreach announced in August 2019 it is accelerating its rollout of FTTP over the next 12 months. This forms part of their Fiber First programme which aims to achieve coverage for 4 million premises by March 2021.

As part of ‘Project Lightning’, Virgin Media aims to cover 4 million premises by the end of 2020, although this connection includes a mix of full-fiber and cable broadband lines.

Bachrach concludes: “CityFibre aims to deploy full-fiber to 5 million businesses and homes by 2025. Hyperoptic plans on passing 500,000 premises by the end of 2019 with fiber, in line with their ambition to rollout an additional 1.5 million connections by 2022.”