Uncertainty around Brexit and the US-China trade war resulted in a poor performance in the UK wealth market in 2018. This year, uncertainty is continuing and KPMG have recently predicted a 1.5% GDP decline in 2020 if Brexit ends in a no deal, worse than the decline in 2008. If this estimation comes to fruition, there will be a damaging fourth quarter in 2019 which will reduce the UK wealth market by up to 5% in both 2019 and 2020, forecasts GlobalData, a leading data and analytics company. 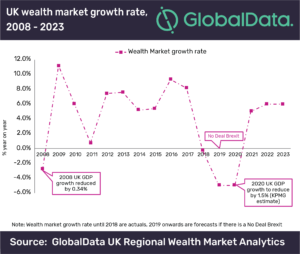 The fund market, due its larger proportion of the overall wealth mix will be a particularly big driver of the declines. Interest rates have remained low for over a decade in the UK, reducing the role of deposits as well as bonds in the nation’s investment portfolio, while funds have been growing ever more attractive by comparison.

Woldemichael adds: “Deposits in the UK held 64% of the average UK portfolio in 2008, but since then this has reduced to 58% as of 2018. And so, with deposit’s ability to act as a shock absorber reduced, the average portfolio is more prone to larger swings, in the good times and the bad.

“In the years following the Brexit decision, the UK wealth market is likely to revert to continued positive growth as certainty and growth return but wealth managers are in for a wild ride over the next year.”