Urban population increased by 45.8% between 2000 and 2018, outpacing the world’s overall population growth of 24.3% during the same period, according to GlobalData, a leading data and analytics company.

The urban landscape is in the midst of a transformation, with focus on the urban world shifting east. The urban world will also see an increase in the number of megacities (cities with a population of more than 10 million). These megacities can be treated as discrete markets due to their cosmopolitan character, unique features and size, which is comparable to national economies.

GlobalData estimates that by 2025 around 60% of the world population will live in cities as compared to 55% in 2018. Furthermore, by 2025, 735 metros (cities with population of more than a million), including 48 megacities, will be home to approximately 2.88 billion people as compared with 712 metros, including 39 megacities, accounting for a population of 2.67 billion in 2018.

A desire for better lifestyle and high standard of living continue to be the major drivers for migration to urban centers; however, other drivers include the need for better:

• Employment: Rapid urbanization will be responsible for mass migration of youth seeking employment. Metros are expected to witness 9.1% increase in the number of employed people, from 1.17 billion in 2018 to 1.28 billion by 2025. Around 70.4% of total population in cities will be between the age group of 15 and 64 years. These cities will have a dependency ratio (% of non-working population to working population) of 42%, as against the world’s ratio of 56.44% in 2025.

• Education: Cities fare better than rural areas in terms of literacy rates due to superior educational infrastructure. For example, according to the National Sample Survey – Education and Health in India, literacy rate for people aged 15 years and above was 64.1% compared with 84% in urban areas in 2014.

Migration to urban areas and better employment opportunities are resulting in a shift in economic balance, with GDP growing in tandem. GDP of metros is expected to increase by 41.2% from US$50.62 trillion in 2018 to US$71.47 trillion in 2025. Metros are expected to contribute 59.5% to the global GDP by 2025.

Tarun Bisht, Economic Research Analyst at GlobalData, said: “As employment in cities increases, there will also be an increase in income levels and spending power, resulting in an expansion of the urban consuming class.”

Cities will also be home to 545 million households with average income of more than 20,000 Int’l$ (PPP). 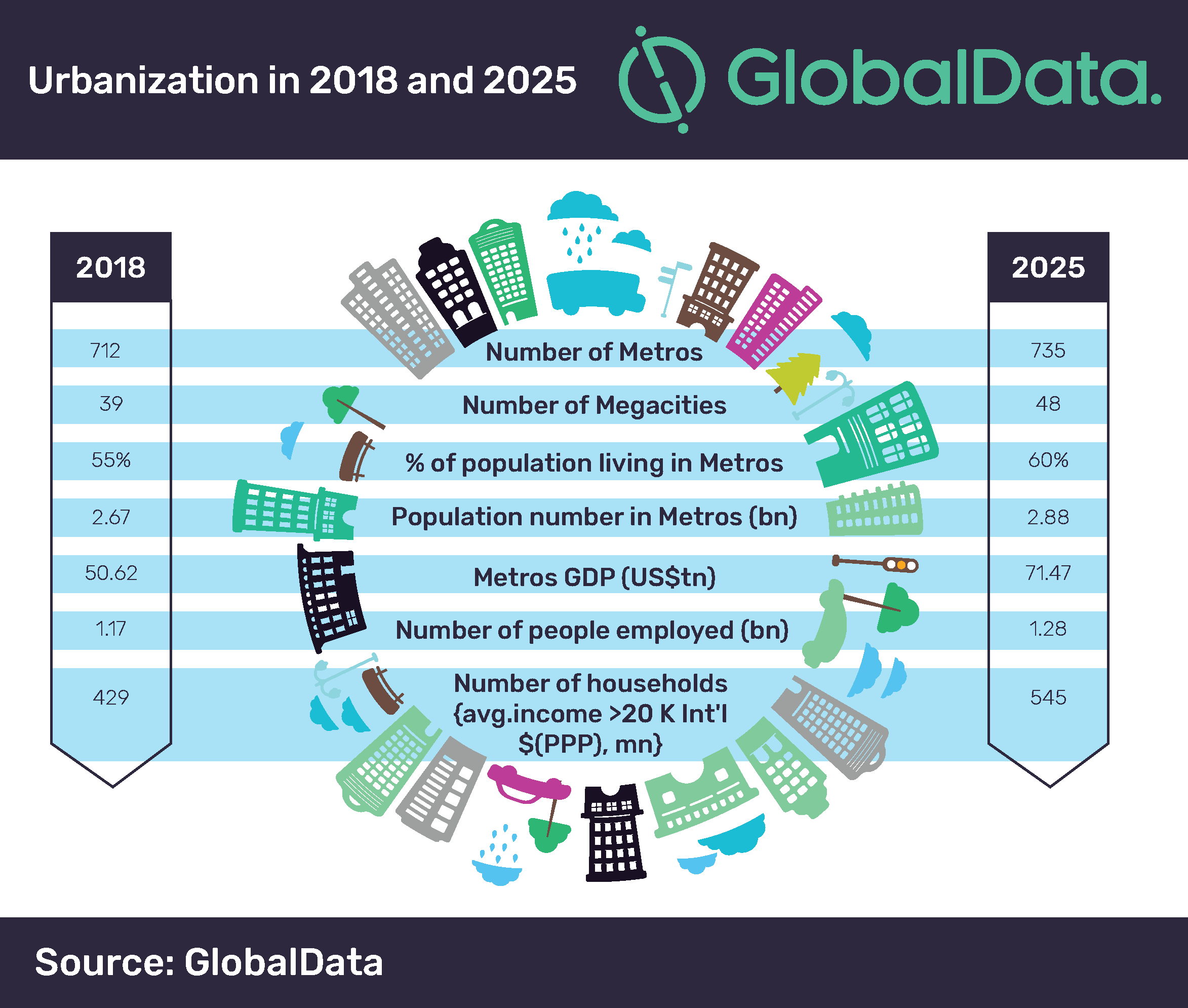 Key Challenges – Efficient planning and infrastructure development is crucial for maintaining a quality of life
Although population growth in cities offers tremendous opportunities, it will test every government’s resolve. Urbanization will push them like never before to work with limited budgets and shorter turnaround time while ensuring optimal resource management for efficient urban planning and infrastructure development.

The population influx in cities will impact the following:

1. Energy consumption: according to the World Bank, cities consume two-thirds of the world’s energy and account for more than 70% of global greenhouse gas emissions.
2. Increase in slum population/areas: around 31.60% of the world population will live in slums by 2050, according to UN Habitat.

Demand for new buildings, water supply, sanitation, electricity, telecommunications and transport infrastructure is set to increase along with growth in urban population. Inappropriate planning may lead to environmental problems. Continuous infrastructure expansion to relieve overstressed systems remain a challenge for large and developed cities struggling to find new techniques. However, developing cities have the advantage of adopting innovative technologies for future planning strategies to build and expand the required infrastructure.