Global venture capital (VC) investment witnessed a gradual decline in two consecutive months (May and June) in the second quarter (Q2) of 2019, primarily due to a decline in the total number of VC investments in the US and China, according to GlobalData, a leading data and analytics company.

The US and China collectively accounted for more than 60% of the total investment volume (including investments with disclosed funding value) during Q2 2019. The total number of VC investments in these two markets declined from 1,003 in April to 961 in May and 775 in June 2019.

On the other hand, few key markets outside these two markets registered an upswing in deal volume, though they failed to completely offset the overall decline. The UK, France and Canada were among the few key countries that continued to witness consistent growth in VC investments during the review period.

Aurojyoti Bose, Financial Deals Analyst at GlobalData, says: “With the ongoing US-China trade dispute showing no signs of slowdown, VC investors in these two markets will keep a close watch on the developments. Investment activity is also expected to be influenced by Brexit uncertainty. However, companies in other countries, more specifically in the emerging economies, are expected to be on the radar of VC investors more than ever before.”

The share of deals across all the value ranges mostly remained unchanged/flat across all the months during Q2 2019. While the quarter witnessed the announcement of few mega deals (investment >=US$1bn), low value deals (investment <=US$10m) continued to dominate VC investments with 75.2% share in the overall volume. All three months registered the highest number of deals in the range of US$1m-US$5m. 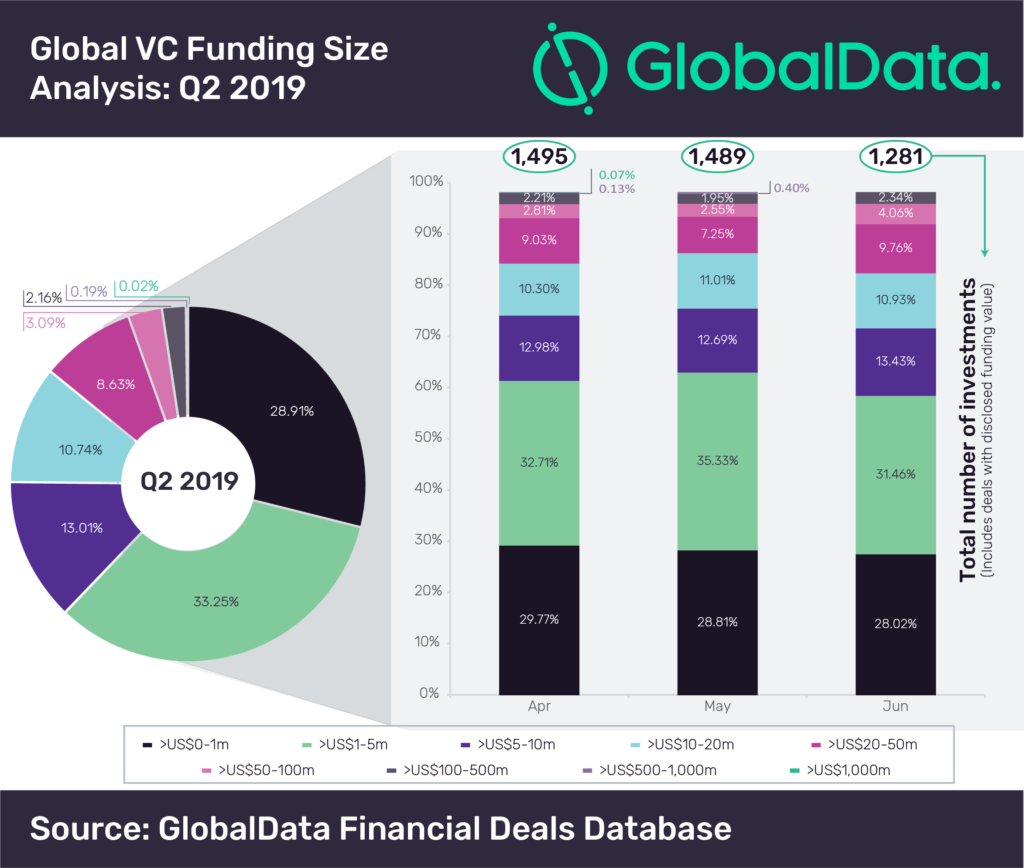 Some of the notable deals in April 2019 included the announcement of Grab’s plan to raise US$2bn and US$568m Series D funding raised by UiPath.

Some of the notable deals announced in May include US$1bn raised by JD Health and US$750m raised by Megvii.
June also saw a decline of 14% in VC deal volume (with disclosed deal value) as compared to the previous month. The month did not witness any deals valued more than US$500m. Low value deals as a percentage of the total deal volume stood at 72.9%. The number of VC investments declined by 22% in the US. Though China recovered, the investment volume remained flat when compared to April 2019 investment levels.

Some of the notable deals announced in June included US$500m raised by Ziroom and US$362m raised by Bordrin Motor.