The US is expected to lead the liquefied natural gas (LNG) liquefaction capacity growth in North America by 2024, accounting for around 92.6% of the region’s total growth. Approximately 144.6 million tonnes per annum (mtpa) is likely to be added by the US by 2024, says GlobalData, a leading data and analytics company.

GlobalData’s report, ‘LNG Liquefaction Industry Outlook in North America to 2024’, reveals that liquefaction capacity in North America is expected to increase by 156.2 mtpa, from 69.9 mtpa in 2020 to 205.1 mtpa by 2024, registering an average annual growth rate (AAGR) of 26.9%. Of the total capacity additions in the region, 125.5 mmbd is expected to come from planned projects, while the remaining 30.7 mmbd is likely to come from the expansions of active/operational projects.

Adithya Rekha, Oil and Gas Analyst at GlobalData, comments: “In North America, the US is likely to witness capacity additions mainly through the commencement of 11 planned and announced liquefaction terminals during 2020 and 2024. Of these, Rio Grande liquefaction terminal in Texas is one of the largest new-build projects with a capacity of 16.2 mtpa. It aims to monetize abundant, low-cost unconventional gas in Permian Basin and Eagle Ford shale as exports.” 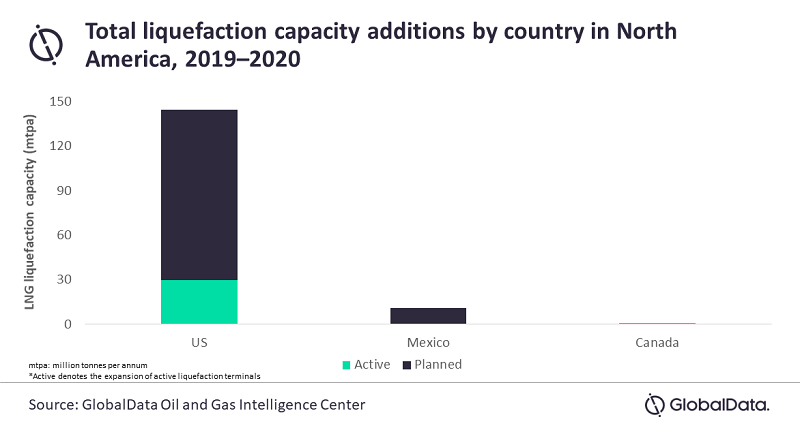 GlobalData expects Mexico to occupy second position in terms of liquefaction capacity additions in North America by 2024. It is expected to add around 10.9 mtpa through four upcoming terminals by 2024. Among the upcoming terminals in Mexico, ECA Mid-Scale and Amigo Floating are the major terminals likely to add a combined liquefaction capacity of 6.4 mtpa by 2024. The remaining additions are from the announced terminals, Sonora and Salina Cruz Floating, which are expected to start operations in 2024 and 2023, respectively.

Rekha concludes: “The expansion of the only active terminal in Canada, Tilbury, is expected to add roughly 0.7 mtpa of liquefaction capacity in the country by 2024.”

Around three quarters of North American midstream projects that got impacted are in the US
Reduced LNG demand due to economic slowdown has led to delays in FIDs
COVID-19 could force constrained Eastern Mediterranean gas production until 2023
BP’s low carbon energy ambitions will be impacted by market weakness
North America to lead global small-scale LNG liquefaction capacity additions through 2024, says GlobalData