Low value deals (≤ US$10m) accounted for most of the venture capital (VC) investment volume in the Asia-Pacific (APAC) region while billion-dollar deals remained mostly non-existent during the second quarter (Q2) of 2021, according to GlobalData, a leading data and analytics company.

An analysis of GlobalData’s Financial Deals Database reveals that the region saw the announcement of 1,252 deals (with disclosed deal value) during the quarter with low value deals dominating the VC investment landscape with 56.2% share of the overall investment volume. Deals valued more than US$100m and US$1bn accounted for just 5.4% and 0.1%, respectively. The quarter witnessed the announcement of one-billion-dollar deal.

Aurojyoti Bose, Lead Analyst at GlobalData, comments: “Low value deals have been dominating the APAC VC deals landscape and the trend continued even in Q2 2021. Amid the volatile market conditions, VC investors globally are showing caution in placing big bets and APAC is not an exception. In addition, the fear of third wave of COVID-19 looming large on some of the key markets such as Thailand, Japan and India is dampening the investor sentiments.” 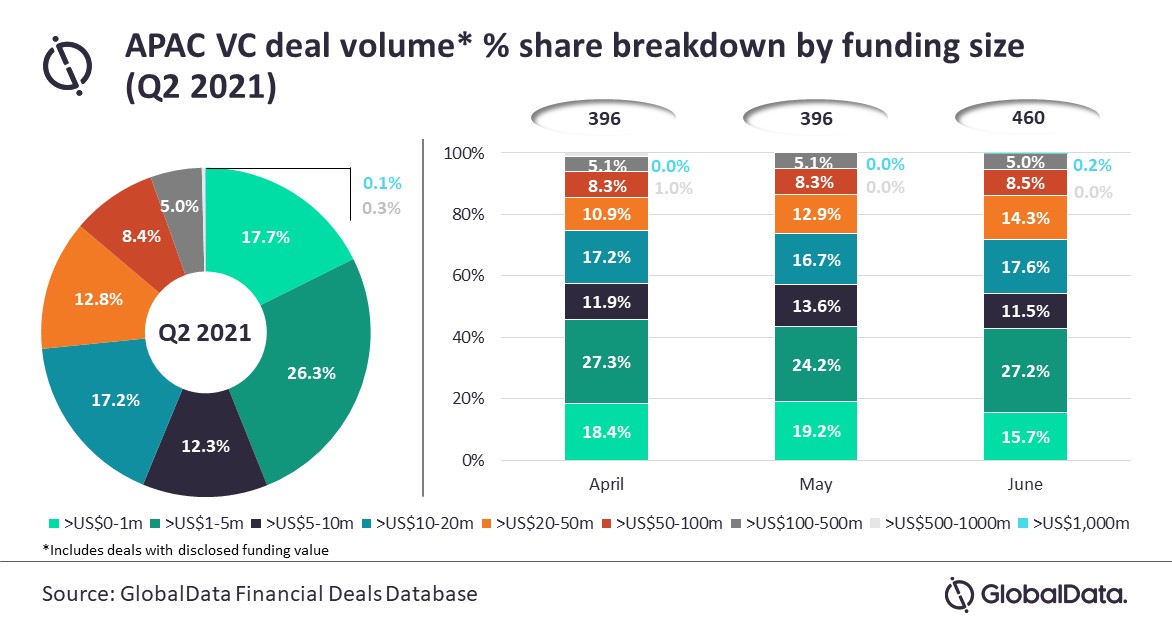 VC investment volume (deals with disclosed deal value) remained at the same level in April and May with 396 deals while deal volume increased by 16.2% to 460 in June 2021.

Mr Bose concludes: “Even though VC investors are now more cautious than ever before in committing big ticket deals due to the ongoing uncertainty, the APAC investment landscape looks relatively brighter as the number of VC deals with disclosed funding value announced globally witnessed month-on-month decline during the quarter while in APAC it witnessed growth.”