Withdrawal of India’s GSP benefits can impact over US$5.6bn worth of exports to US, says GlobalData

12 Mar 2019
Withdrawal of India’s GSP benefits can impact over US$5.6bn worth of exports to US, says GlobalData

The US has recently announced plans to withdraw duty benefits on Indian products under the Generalized System of Preferences (GSP) scheme having accused India of not providing reasonable access to its markets. Reportedly, India is one of the largest beneficiaries of the program, with more than US$5.6bn* worth of commodities exported to the US under the GSP scheme in 2017, observes GlobalData, a leading data and analytics company.

Jaison Davis, Senior Economic Research Analyst at GlobalData, comments: ‘‘At a time when India’s export outlook looks gloomy and the trade deficit remains a cause of concern, any impact on exports can only worsen the situation. However, India remains fairly bullish about these developments saying that the move is unlikely to have a major impact on its economy, and plans to retaliate by imposing tariffs itself on US imports worth US$10.6bn.’’

The US administration has been urging India to reduce high tariffs imposed on exported products like Harley Davidson motorcycles, natural rubber, textiles and alcoholic beverages for some time. Even though US-based multinational companies like Facebook, Uber, Google and Amazon have their active operations in India, the relationship between the two nations is strained as India has imposed new e-commerce regulations to protect its retail sector from the impact of American retail giants like Amazon and Walmart.

Total exports from India to the US stood at US$38.82bn** during the financial year 2018-2019 with 10 commodity categories covered under the GSP rules, including pearls and precious metals, machinery and mechanical appliances and chemical products, accounting for 42.78% of India’s total exports during the period.

Davis adds: ‘‘The Indian administration and business community are of the opinion that the anticipated US$190m tariff benefits lost in 2019 will have little impact on larger companies like Tata Steel, Sun Pharma, Rajesh Exports and Vardhaman textiles. However, small and medium enterprises (SMEs) like garment businesses at Tirupur in Tamil Nadu state, which trade with the US, could be more adversely impacted. 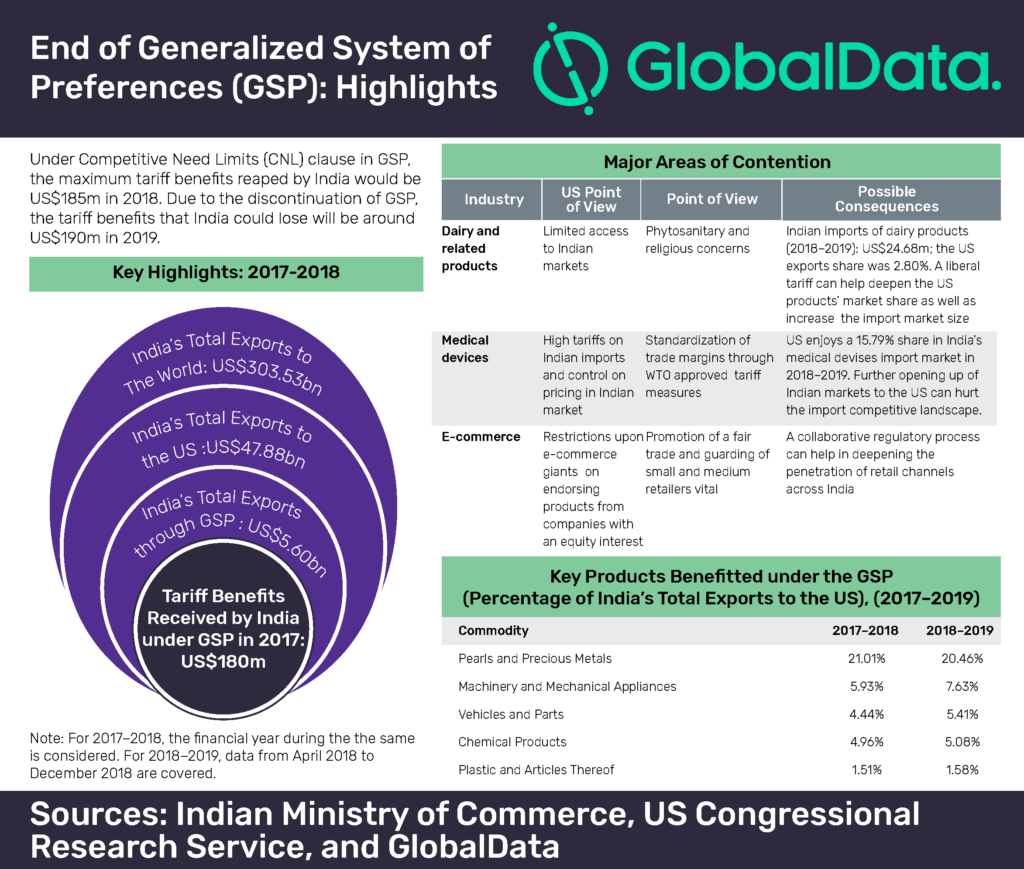 A preliminary analysis indicates that around 90% of India’s exports to the US are channelled without any preferential treatments, with 50% of exports subjected to minimal tariffs. The US is also a major trading partner with India’s services segment, accounting for around 36% of its total exports to the US.

Davis concludes: ‘‘GlobalData has observed both the US and Chinese economies slowing down in the last quarter following their tariff war and the prospect of one with India with the added effect of foreign exchange rates would best be avoided through proactive negotiations rather than resorting to further retaliatory measures.”

‘*’ data from the Indian Ministry of Commerce