After years of hype and steady uptake, Internet of Things (IoT) technology is all set to become a part of mainstream adoption. Right from industrial goods, retail, utilities, healthcare, agriculture, logistics to aviation, startups are offering IoT-enabled solutions ranging from connected cars, automated home, medical IoT, wearable technology to smart cities. Against this backdrop, the Unicorn Prediction Model of GlobalData, a leading data and analytics company, has released a list of 25 IoT startups that have the potential to become unicorns (valuation > US$1bn).

Apoorva Bajaj, Practice Head of Financial Markets at GlobalData, says: “Innovation in IoT is entering into a stabilization phase, as evident by the decline in new patent applications and venture capital (VC) deals activity but its adoption is increasing as corroborated by increase in hiring activity and corporate filing mentions with more companies mentioning about their IOT related initiatives.”

GlobalData’s recent report, ‘Future Internet of Things (IoT) Unicorns reveals that in Q2 2021, the IoT industry reported investment in excess of US$6.4bn spanning 268 deals globally. During the period, Asia-Pacific accounted for nearly half of the overall VC deal volume, followed by North America (primarily the US) with 34%.

When it comes to social media discussions, ‘IoT’ and its use cases in autonomous driving, cellular IoT, port operations and education are increasingly being mentioned by social media influencers. Right from AT&T and Cisco launching 5G network capabilities for IoT application to Intel subsidiary Mobileye’s plan to launch fully autonomous vehicle Robotaxi are some of the trending IoT discussions on social media platforms. 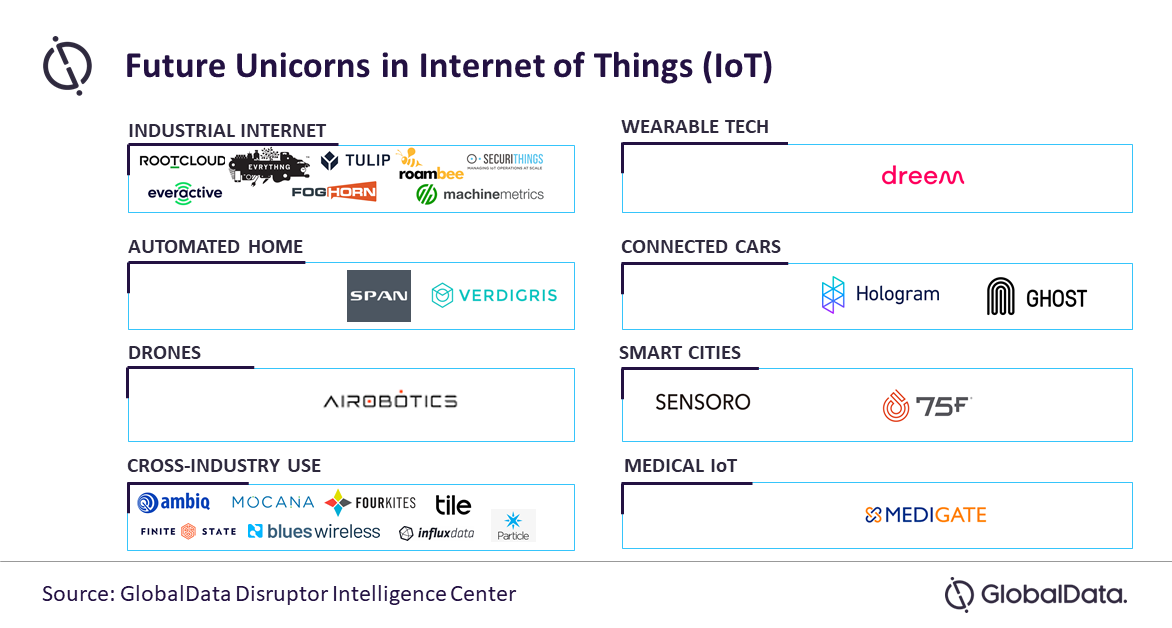 Some of the IoT startups in GlobalData’s list of potential unicorns include Everactive, Span.IO, Mocana, and Medigate.

Span.IO offers intelligent hardware and software solutions for distributed energy resource management. The company develops core products to enable the rapid adoption of renewable energy and deliver an intuitive interface for the home.

Medigate operates as a medical device security and asset management platform that offers threat detection and attack prevention services for all connected medical devices on health care provider networks. In 2020, Forescout Technologies partnered with Medigate to add an additional level of cohesive device insight, expertise, and security for the healthcare industry.

Mr. Bajaj concludes: “In a post-COVID-19 era, several organizations consider digitalization as their top priority, and see IoT as one of the enablers. Fueled by this digital transformation wave, the demand for new IoT applications will continue to increase in 2021 and beyond led by its applications in industries, connected cars, automated home, smart offices, medical devices, remote asset monitoring, drones, and location tracking services. Driven by this underlying demand, IoT market is expected to reach US$1 trillion with enterprise IoT accounting for 74% revenue share and consumer segment accounting for the rest in 2024.”