Amazon speeds ahead of e-commerce competitors in ranking of top 25 publicly trading retailers by MCap in Q2 2020 with a 41.8% QoQ rise, says GlobalData

27 Aug 2020
Amazon speeds ahead of e-commerce competitors in ranking of top 25 publicly trading retailers by MCap in Q2 2020 with a 41.8% QoQ rise, says GlobalData

Amazon saw a huge rise in market capitalization (MCap) in H1 this year as customers flocked to online platforms amid lockdowns. Having now reached the US$1 trillion mark – and seeing a whopping 41.8% rise in Q2, when compared with Q1 – the e-commerce company is powering ahead of competitors globally, with over 125% lead over its closest rival Alibaba, which saw 10.9% growth in Q2. Quarter-on-quarter (QoQ) MCap growth was seen across the top 25 publicly traded global retailers, as ranked by GlobalData. 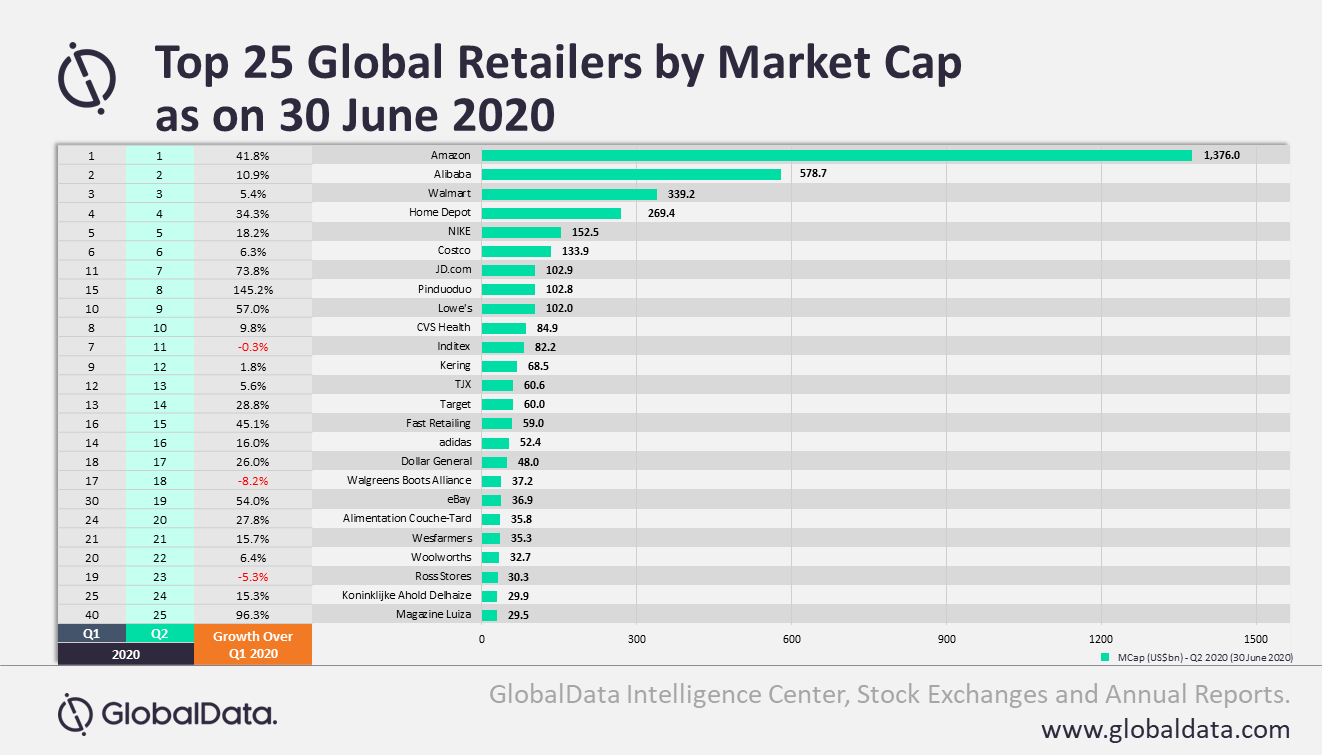 Keshav Kumar Jha, Business Fundamentals Analyst at GlobalData, comments: “As social distancing remains one of the most utilized strategies to slow the spread of COVID-19, customers relied on e-commerce platforms for their everyday purchases. This drove Amazon’s stock to gain over 40% during April-June 2020. Investors took their cue from the company’s strong Q1 results, which witnessed online store sales growing by 24.3% and Amazon Web Services (AWS) sales growing by 32.7%.

“Meanwhile, major e-commerce retailers such as JD.com, Pinduoduo and eBay recorded over 50% growth in their MCap during Q2, mainly due to higher online retail sales and rises in active buyers on their e-commerce platforms.”

The Chinese e-commerce giant, Alibaba, also reported an improvement in net earnings and an increase in active users on its platform. However, the growth is conservative at just over 10%, which was significantly lower than other online retailers.

Jha noted: “This could be attributed to concerns about Chinese companies being delisted from the US stock exchange, following the passage of The Holding Foreign Companies Accountable Act (HFCAA) by the US Senate in May 2020.”

Major home improvement retailers, Home Depot and Lowe’s reported increased total sales and comparable sales in their Q1 2020 ended in the first week of May. Investors seemed impressed with both retailers’ continued investment in their digital capabilities expansion, including strengthening e-commerce and online offerings, which paid dividend with their stock surging by 36.9% and 68%, respectively, during April-June.

US-based pharmacy retailer CVS Health also reported over 9% increase in its pharmacy same-store sales in the three months ended March 31, 2020, compared to the prior year. This was driven primarily by COVID-19-related increased prescription volume. The company has continued with its tradition of paying cash dividends every quarter even amid the pandemic, which helped regain investors’ confidence with its stock climbing by 11.4% during the review period.

Jha continued: “eBay and Magazine Luiza have made entry into the top 25 retailers by MCap, with eBay gaining over 80% during the quarter, and Magazine Luiza’s stock rising by 96.3% during April-June. The Brazilian retailer’s stock surged on the back of strong digital sales in Q1 and its decision to sell books online.

“The implementation of restrictive social distancing measures across various parts of the world has forced retailers to adopt a well-balanced omnichannel strategy to stay competitive. Retailers need to focus on strong omnichannel execution, along with product offerings, and fulfilment and delivery services to sustain the ongoing momentum.”