Driven by increasing demand from the Asia-Pacific (APAC) region, the global military unmanned aerial vehicle (UAV) market is set to grow at a compound annual growth rate (CAGR) of 3.14% from US$10.9bn in 2019 US$14.8bn in 2029, according GlobalData, a leading data and analytics company.

GlobalData’s latest report, ‘The Global Military UAV Market 2019-2029’ reveals that the cumulative spending in the military UAV sector is estimated to be US$136.9bn over the forecast period.

In terms of segments, unmanned combat aerial vehicles (UCAV) are expected to account for the largest share of expenditure globally, with a market share of 41.3, driven by Chinese proliferation and lowered limits on sales.

The Chinese presence on the market has also prompted US legislative relaxation of exports bans, with other NATO countries being cleared for US UCAVS (the UK, France, Belgium, Italy, etc.) beyond the previous buddy-lasing compromise option of UAV sales, whereby buddy-lasing platforms were offered rather than direct UCAVs.

Anthony Endresen, Defense Analyst at GlobalData, comments: “The demand for UAVs is expected to be driven by territorial disputes, internal and external security threats, regional arms race in the Middle East and APAC, increasing counterterrorism operations and military modernization initiatives undertaken by the armed forces across the world.” 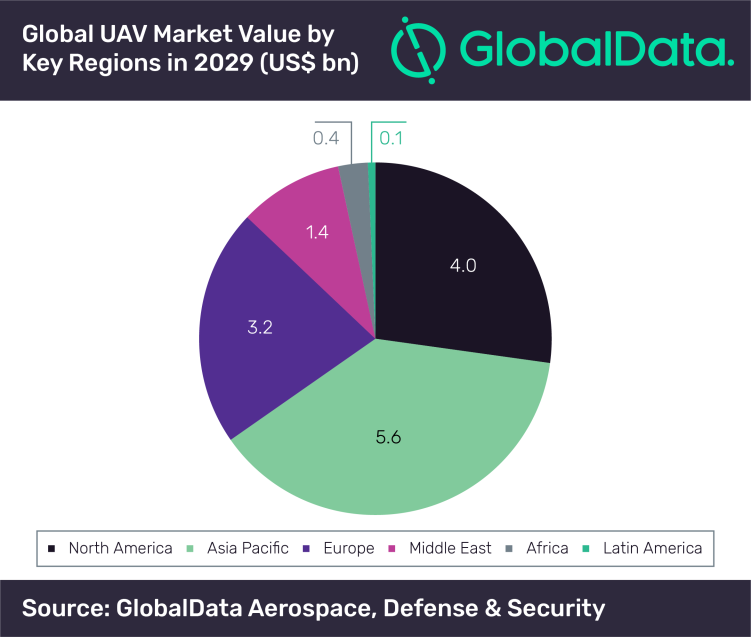 The global military UAV market is expected to be led by APAC, which is expected to register a value of US$5.6bn in 2029 followed by North America and Europe with US$4bn and US$3.2bn, respectively.

Endresen concludes: “The Military UAV landscape is undergoing significant change, which includes increased diversification of UCAV producers in addition to a greater diversity of platforms and platform types. The blurring of lines between UAVs and loitering munitions is one of many such examples. Another emerging platform type to watch is the ‘sidekick UCAV”, like Boeing Australia’s Loyal Wingman, Kratos’ XQ-58 Valkyrie, or the British Ministry of Defence’s  Project Mosquito.”