Australian cosmetics & toiletries market set to be worth AUD9.4bn by 2023, says GlobalData

Increasing disposable income backed by a steady labor market has contributed to the growth of the cosmetics & toiletries industry in Australia, which is expected to grow at a compound annual growth rate (CAGR) of 3.8% from AUD7.8bn (US$5.9bn) in 2018 to AUD9.4bn (US$7.3bn) in 2023, says GlobalData, a leading data and analytics company.

GlobalData’s report, ‘Country Profile: Cosmetics & Toiletries in Australia’, reveals that skincare products held the largest value share of 21.8%, followed by personal hygiene products, which accounted for a value share of 16.6% in 2018.

The company predicts that the ‘suncare’ category will grow at the fastest value CAGR of 7.4%, followed by male toiletries, which is estimated to record a value CAGR of 4.9% during 2018–2023.

Anugna Victor, Consumer Analyst at GlobalData, says: “Rising employment levels is driving the growth of the cosmetics & toiletries industry in Australia, as an increasing number of the working population wish to look good at their workplace, thus seeking make-up products.”

However, Australia’s value share in the Asia-Pacific (APAC) region, which stood at 3.6% in 2018, is anticipated to decline to 3.2% in 2023, mainly due to the projected faster growth of cosmetics & toiletries products in other leading countries in the region, such as China, during the forecast period.

According to the report, the per capita consumption (PCC) of cosmetics & toiletries in Australia, which is high compared to both APAC and global levels, is set to marginally increase from 33.7 units in 2018 to 34 units in 2023. 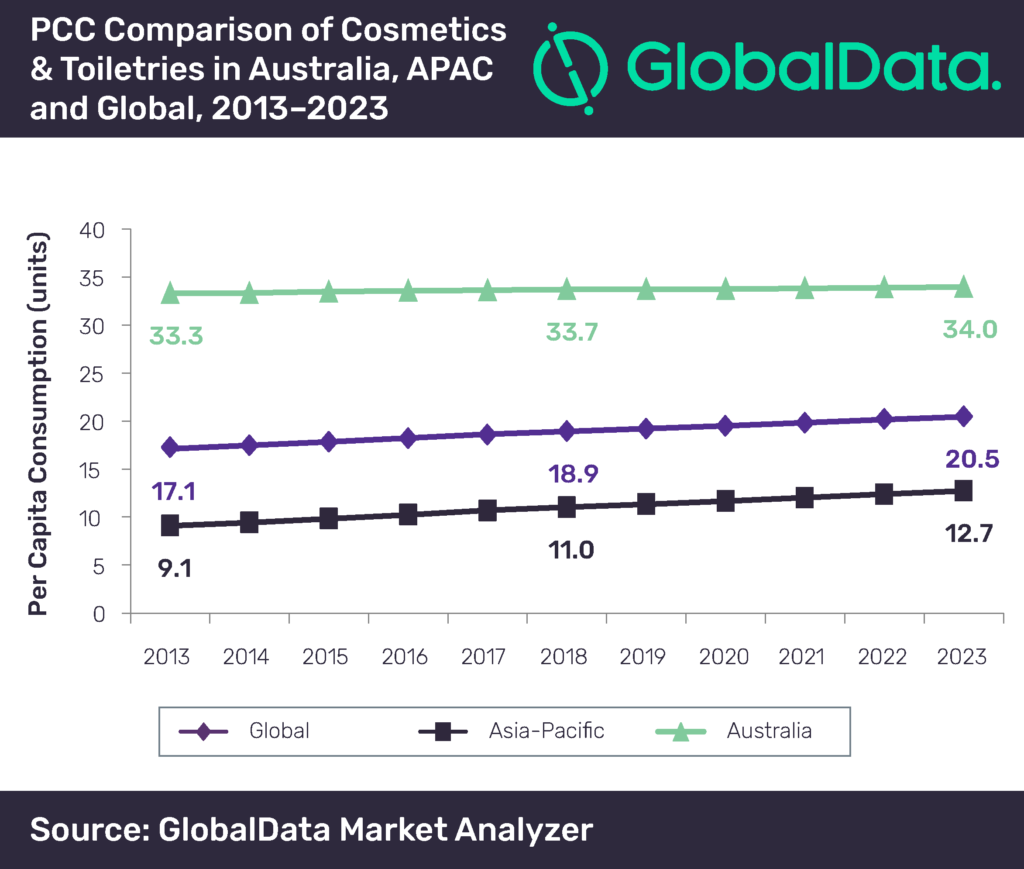 The report also states that L`Oreal S.A., Procter & Gamble and Unilever were the leading market players while Colgate, Gillette and Nivea were the top brands. Private label products grew at a faster CAGR than branded products during 2013–2018 to reach overall penetration levels of 1.2% in 2018, supported by a well-developed distribution network of hypermarkets and supermarkets, and consumers’ positive perception of private label products.

Victor concludes: “As consumers in Australia are increasingly becoming aware of the harmful effects of chemicals in cosmetic & toiletries, products with claims such as ‘herbal’ and ‘100% natural’ will contribute to the growth of the market in the coming years.”