The global aviation industry has been affected by the COVID-19 outbreak. After relaxation on air travel, several airline operators are taking various measures to mitigate the losses and meet the travel demand ahead of the holiday season. This has led to a staggering 100% year-on-year rise in influencer conversations on Airlines Influencer dashboard during Q4 2020. Against this backdrop, British Airways emerged as the most mentioned airline operator in the UK among influencer conversations on Twitter during the period, reveals GlobalData, a leading data and analytics company. 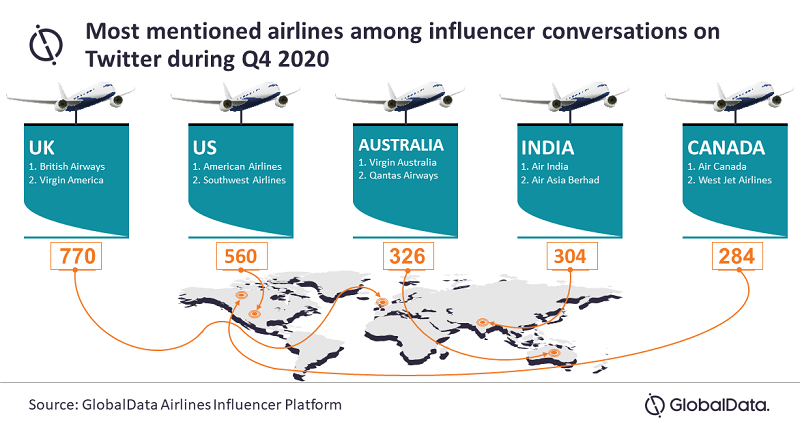 Smitarani Tripathy, Influencer Analyst at GlobalData, comments: “In December, there was a sharp rise in influencer conversations around British Airways on Influencer platform, when the company decided to test all passengers for COVID-19 in response to the new strain of the virus. British Airways implemented this procedure from 22 December.”

America Airlines scheduled to cancel about 50% of its flights in the holiday season, which led to a rise in influencer conversations in November. To mitigate the losses due to depressed demand, American Airlines continued to operate reduced schedule and limited routes. In December, the operator reduced about 10,000 more flights when compared to November.

Air India continued to expand its international service under Vande Bharat repatriation scheme or through bilateral travel bubbles with certain countries. Air India announced to start two new routes in early 2021, which led to a spike in influencer conversations in November 2020. The non-stop flight service between Hyderabad and Chicago in the US, started from 13 January 2021 and will be operated bi-weekly. The other one is Bangalore-San Francisco route, which started serving from 9 January 2021.

Influencer conversations surged for Virgin Australia when it received the regulatory approval in November. The Australian Competition and Consumer Commission (ACCC) provided the interim authorization to Virgin Australia to cooperate with Alliance Airlines to serve 41 regional domestic routes and two short-haul international services.

Air Canada forged a strategic partnership with Qatar Airways in December 2020, which led to a spike in influencer conversations. With this partnership, Air Canada also launched non-stop service between Toronto and Doha, the fourth Middle East route. Another spike on influencer conversation was noticed around Air Canada in December, when it partnered with Chase and Mastercard to launch Aeroplan US credit card.