The global CSP capacity is estimated to increase significantly from 5.6 gigawatt (GW) in 2018 to 22.4 GW in 2030 following significant capacity additions by China, Chile and countries in Middle East North Africa (MENA) region according to GlobalData, a leading data and analytics company.

Pavan Kumar Vyakaranam, Power Analyst at GlobalData, comments: “The CSP industry added around 601 megawatt (MW) annual capacity in 2018 with projects being operational in countries such as Morocco, China, South Africa, Saudi Arabia and Kuwait. China added around 200 MW of CSP capacity in 2018 which is almost seven times its cumulative installed capacity at the end of 2017. China CSP market gained momentum after the announcement of 20 CSP projects as part of the first batch of demonstration projects, which will get a feed in tariff (FIT) of RMB1.15/kWh ($0.172/kWh).”

Chile will be another major country, which will have significant CSP capacity additions during the outlook period. The CSP market in Chile is mainly driven by its goal to achieve 20% renewable of the national energy mix by 2025. In order to achieve its goal, the country held a series of technology neutral auctions through which the average tariff plummeted from $129/MWh in 2013 to $32.5/MWh in 2017. 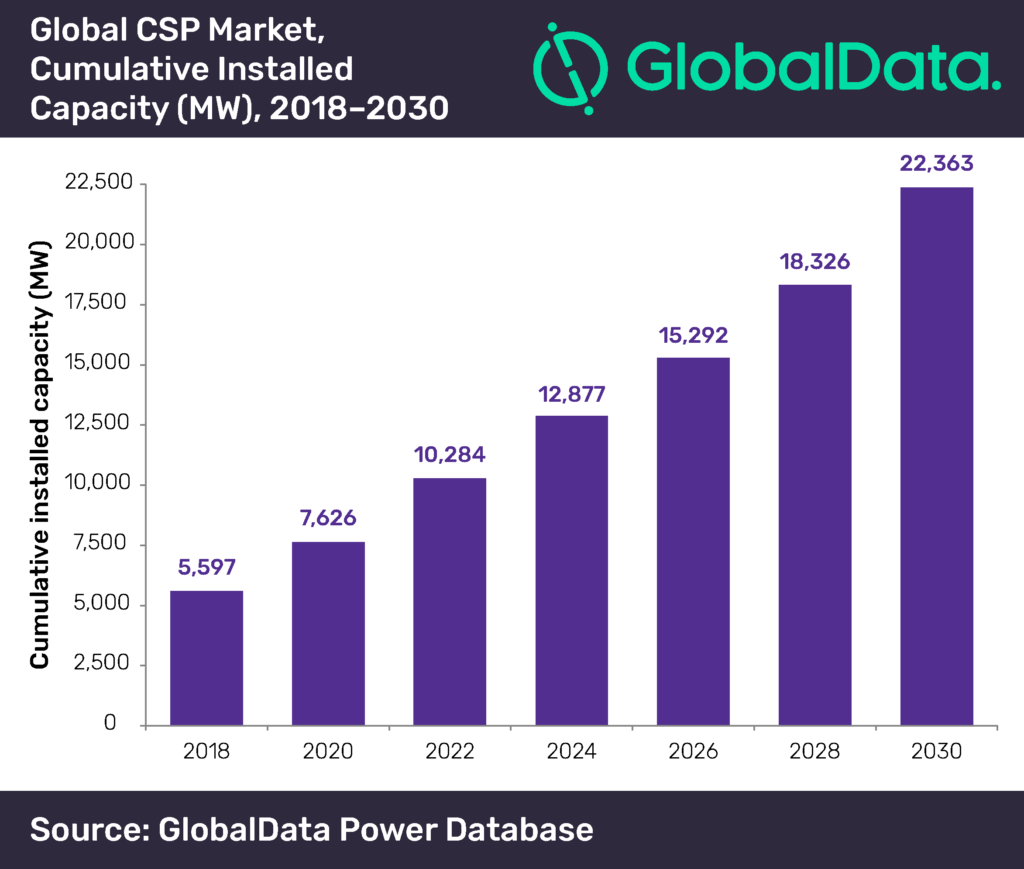 Vyakaranam adds: “In Middle East Africa (MEA), countries such as Morocco, South Africa, Saudi Arabia, the UAE and Israel will play a major role for CSP development during 2019-2030. Morocco had set a plan to source 2 GW from solar power by 2020. The country plans to set up and implement sustainable CSP plants to cover 42% of Morocco’s power needs by 2020 and bridge the demand supply gap during peak evening hours through thermal storage.”

On the other hand, the UAE is promoting solar through auction mechanism. In July 2017, Dubai Electricity and Water Authority (DEWA) received four bids for the fourth phase of the 200 MW Mohammed bin Rashid Al Maktoum solar project. The bids reached a record low, with the lowest offer of $94.5/MWh while the other three bids offered $105.80 -$173.50/MWh.

Vyakaranam concludes: “The global CSP market is on a revival mode with reducing cost of generation through auction mechanism and hybrid PV-CSP. CSP with thermal storage will gain prominence due to increasing demand for reliable and stable power.”