The COVID-19 pandemic has affected the venture capital (VC) investment landscape in the Asia-Pacific (APAC) region, but it has not dampened the spirits of startups and organizations seeking early-stage funding (seed, Series A and B). In fact, early-stage funding rounds accounted for 66.6% share of the total VC deals during the first quarter (Q1) of 2021, according to GlobalData, a leading data and analytics company.

An analysis of GlobalData’s Financial Deals Database reveals that a total of 1,260 VC deals (with disclosed funding rounds) were announced during Q1 2021. Deal volume decreased by 4.5% from 396 in January to 378 in February before bouncing back by 28.6% to 486 in March. Despite the fluctuating trend, the share of early-stage funding rounds remained more than 65% during all the three months of Q1.

Aurojyoti Bose, Lead Analyst at GlobalData, says: “Early-stage funding has been dominating the APAC VC deals landscape and the trend continued even in Q1 2021. Amid the uncertain scenario, VC investors are showing caution in placing big bets. Only seven early-stage funding rounds had deal size of more than or equal to US$100m.” 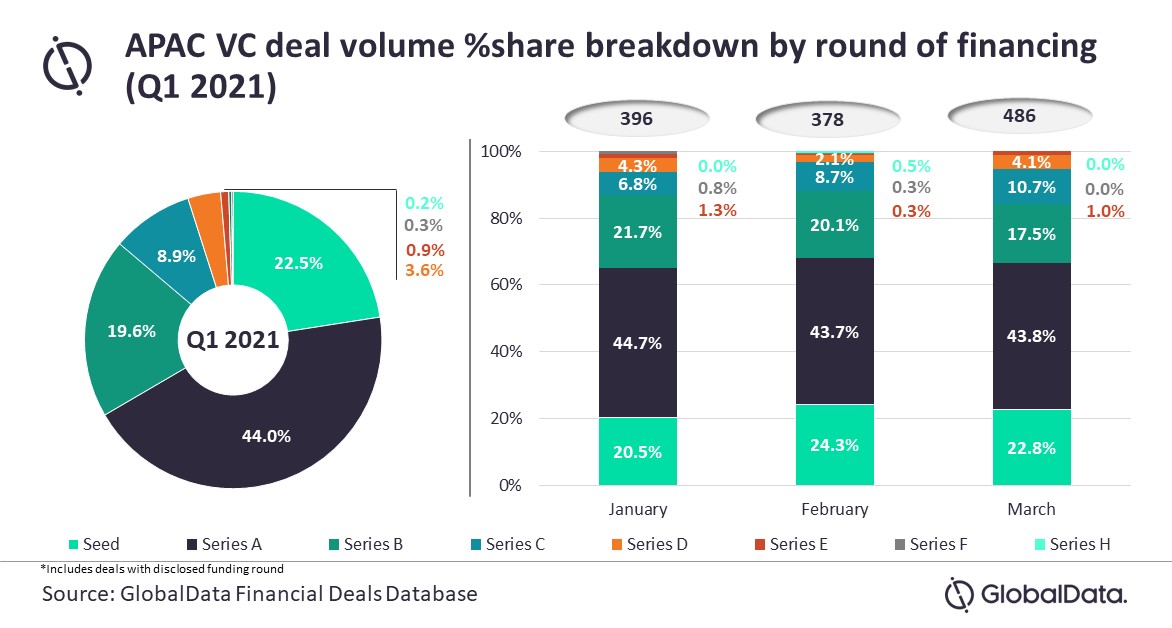 Other funding rounds including growth/expansion/late-stage funding rounds (Series B, C, D, E, F and H) collectively accounted for around 30% of the total deal volume.

While most of the funding rounds’ share as a proportion of total deal volume kept fluctuating during the three months of Q1, the share of Series C funding rounds increased from 6.8% in January to 8.7% in February and reached 10.7% in March.

Mr Bose concludes: “Despite the current volatile headwinds, VC investors seem to be willing to take risks by investing in early-stage startups. They seem to be viewing the current scenario as a window of opportunity to financially back new ventures with fresh ideas.”