Cybersecurity tops the agenda in aerospace and defense sector

With rising cyber threats to critical defense and civil infrastructures, combating these threats is becoming a priority. This is driving a growth in demand for cybersecurity solutions in the aerospace and defense industry. Against this backdrop, cybersecurity remained the top theme/topic of discussion for the aerospace and defense sector in 2019, according to GlobalData’s Company Filing Analytics platform.

According to the platform, which leverages machine learning (ML) and natural language processing (NLP) techniques to identify and track major themes impacting various sectors, the share of companies in the aerospace and defense sector (under coverage in the Company Filing Analytics platform) discussing cybersecurity theme stood at around 60% in 2019.

The total mentions of cybersecurity by these was way ahead of the other themes/topics of discussion for aerospace and defense companies. 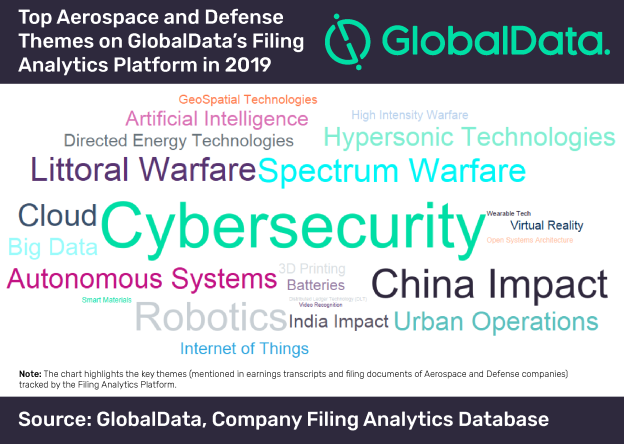 Aurojyoti Bose, Lead Analyst at GlobalData, says: “The aerospace and defense industry has been undergoing a lot of transformations as warfare is no longer conducted only on land, air or sea but also in cyberspace, which is emerging as a battleground of modern warfare. Cyber threats have increased multifold with critical military and civil infrastructures increasingly getting connected over the internet and at the same time making them vulnerable to cyberattacks.”

Even developed countries with cybersecurity architecture such as the US have experienced cyberattacks. For instance, on 4 January 2020, the US Department of Homeland Security issued an advisory warning of potential Iranian cyberattacks on the backdrop of the US drone attack on 2 January 2020, which killed the Iranian commander, Qassem Soleimani. Interestingly, a hackers group named as Iran Cyber Security Group Hackers hacked the Federal Depository Library Program website (a US government database) on the same day the advisory was issued.

Bose adds: “With chances of major digital disruption due to cyberattacks, the defense of any country is now heavily reliant on its ability to defend its cyberspace. Realizing the importance of having a cyberwarfare strategy, most countries have started investing in cybersecurity initiatives and improve their cyberdefense capabilities. Companies have also started viewing this as a promising area.”

Raytheon Co, Lockheed Martin Corp, Airbus SE, L3 Technologies, General Dynamics Corp. and Thales are some of the prominent aerospace and defense companies engaged in providing cybersecurity solutions. Moreover, core technology companies such as Microsoft, IBM, Cisco and FireEye have been providing cybersecurity solutions for the defense sector as well.

Bose concludes: “Growth in investments on cybersecurity solutions is expected to continue for the aerospace and defense sector. While this trend will create opportunities for existing players, the competition is likely to intensify with the underlying potential prompting other companies also to foray into the space.”