Expanding the East-West Pipeline’s crude oil capacity to 6.5 million barrels per day (mmbd) will provide Saudi Arabia with an infrastructural improvement, but it will not help the country to completely stave off risks associated with the Strait of Hormuz’s closure or limited accessibility, says GlobalData, a leading data and analytics company.

Alessandro Bacci, Oil and Gas Analyst at GlobalData, comments: “A capacity expansion to the East-West Pipeline will provide more flexibility in exporting oil for Saudi Arabia but is not a risk-free solution, for example, in scenarios where the Strait of Hormuz is closed or partially blocked. Increased Saudi oil exports from the Red Sea would come at a higher cost for the country, as most of its oil production occurs on the Persian Gulf and is exported to Asia. In addition, oil tankers would have to pass the Bab El Mandeb Strait – another politically dangerous point.” 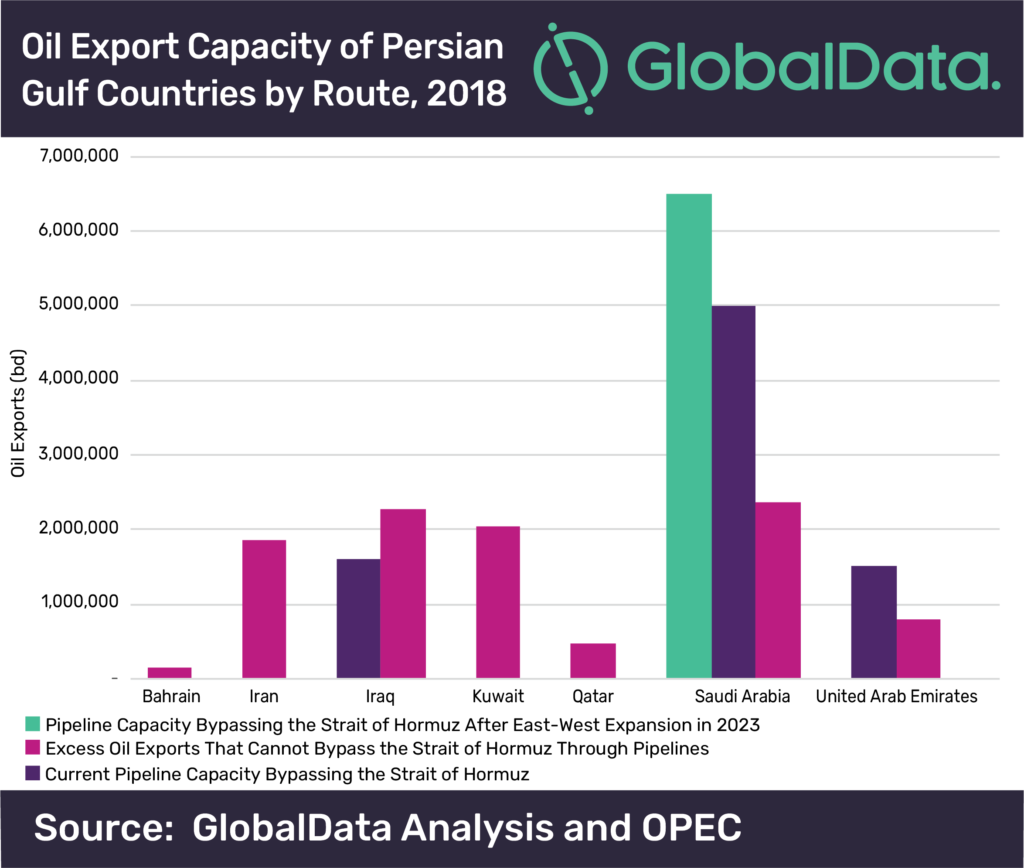 Iraq’s oil exported via pipeline (Kirkuk-Ceyhan Pipeline) is set at both the pipeline design capacity of 1.6 mmbd (although when fully operative the pipeline transported on average 700,000 bd) and at the current average of 300,000 bd as a result of the damages linked to the war against ISIS.

GlobalData’s analysis of oil exports from the Persian Gulf shows that Persian Gulf countries have limited options concerning export routes from the Persian Gulf. Iran, Kuwait, Qatar, and Bahrain export all of their output through the Strait of Hormuz. Apart from Saudi Arabia, only the United Arab Emirates (UAE) and Iraq have infrastructure, albeit limited, capable of bypassing the strait. Moreover, as a result of the geopolitical events of the last three decades, Iraq, OPEC’s second largest oil producer, has fewer exporting routes than it had in the past.

Bacci adds: “Unless Persian Gulf exporting countries build a number of export pipelines capable of bypassing the strait, there is little prospect of full protection against the Strait of Hormuz’s risks. This is true also for liquefied natural gas (LNG) as more than a quarter of the world’s LNG transits through the strait. In the end, options to remedy the closure of or limited accessibility to the Strait of Hormuz are minimal for both oil and LNG trading activity.

“However, as limiting or closing the Strait of Hormuz’s accessibility would not provide benefits to any of the involved countries, Iran’s threats are a brinkmanship exercise intended to obtain a wider negotiating leverage. As Iran relies on the strait to export its oil (although its oil exports are now heavily restricted by the sanctions) and as the country would not be able to militarily close the strait on a long-term basis, it appears that Iran’s behavior in relation to the Strait of Hormuz is a way to gain leverage in future negotiations aimed to remove or at least reduce the US sanctions.”