Edit Kovalcsik, Managing Pharma Analyst at GlobalData, a leading data and analytics company, offers her view on the foreseeable outcome of the competing companies’ eye drugs in the wet AMD space:

“Frequent administration has been a long-standing issue associated with the otherwise effective anti-vascular endothelial growth factor (anti-VEGF) injections for patients with wet AMD. Roche and Novartis’ anti-VEGF, Lucentis (ranibizumab), is injected into the eye every four weeks according to the label, while Eylea, jointly marketed by Regeneron and Bayer, is approved for intravitreal (IVT) injection every four or every eight weeks.

“However, according to Key Opinion Leaders (KOLs) interviewed by GlobalData, both drugs are currently used in line with the treat-and-extend (TAE) protocol rather than in fixed treatment regimens. The reason for this is that each patient requires more or less intensive anti-VEGF therapy with either of these drugs regardless of their label instructions.

“In the TAE, a patient’s retina is first cleared of macular fluid and retinal hemorrhages with a series of monthly injections of the chosen drug, usually for the first three months, and then the interval between treatments is extended usually by two weeks at a time for as long as the retina remains dry and stable. Based on GlobalData’s high-prescribing physician surveys, this means that on average Eylea is injected six times per year compared to about seven Lucentis injections per year in the US; revealing a marginal difference between the two in this respect, leaving one of the biggest unmet need of requirement for less frequent anti-VEGF dosing partially addressed.

“Nevertheless, based mainly on its slightly less frequent administration, Eylea seem to have become the preferred choice, outselling Lucentis by about $1bn in 2016 for wet AMD in the seven major markets (7MM*), according to GlobalData’s report: ‘Age-Related Macular Degeneration: Global Drug Forecast and Market Analysis to 2026’.

“Considering Eylea’s success, brolucizumab, which proved non-inferior efficacy in the Phase III HAWK and HARRIER trials when administered in 12-week dosing schedule compared to Eylea injected every eight weeks, is bound to be an attractive drug for physicians to reduce injection frequency using the TAE protocol. Besides its high-level of reliability for patients to stay on the 12-week dosing regimen, additional benefits of brolucizumab were observed in the Phase III trials over Eylea, including greater reduction in central subfield thickness (CST) and fewer patients having retinal fluid at 16 weeks, which may also add to its competitive edge over Eylea. 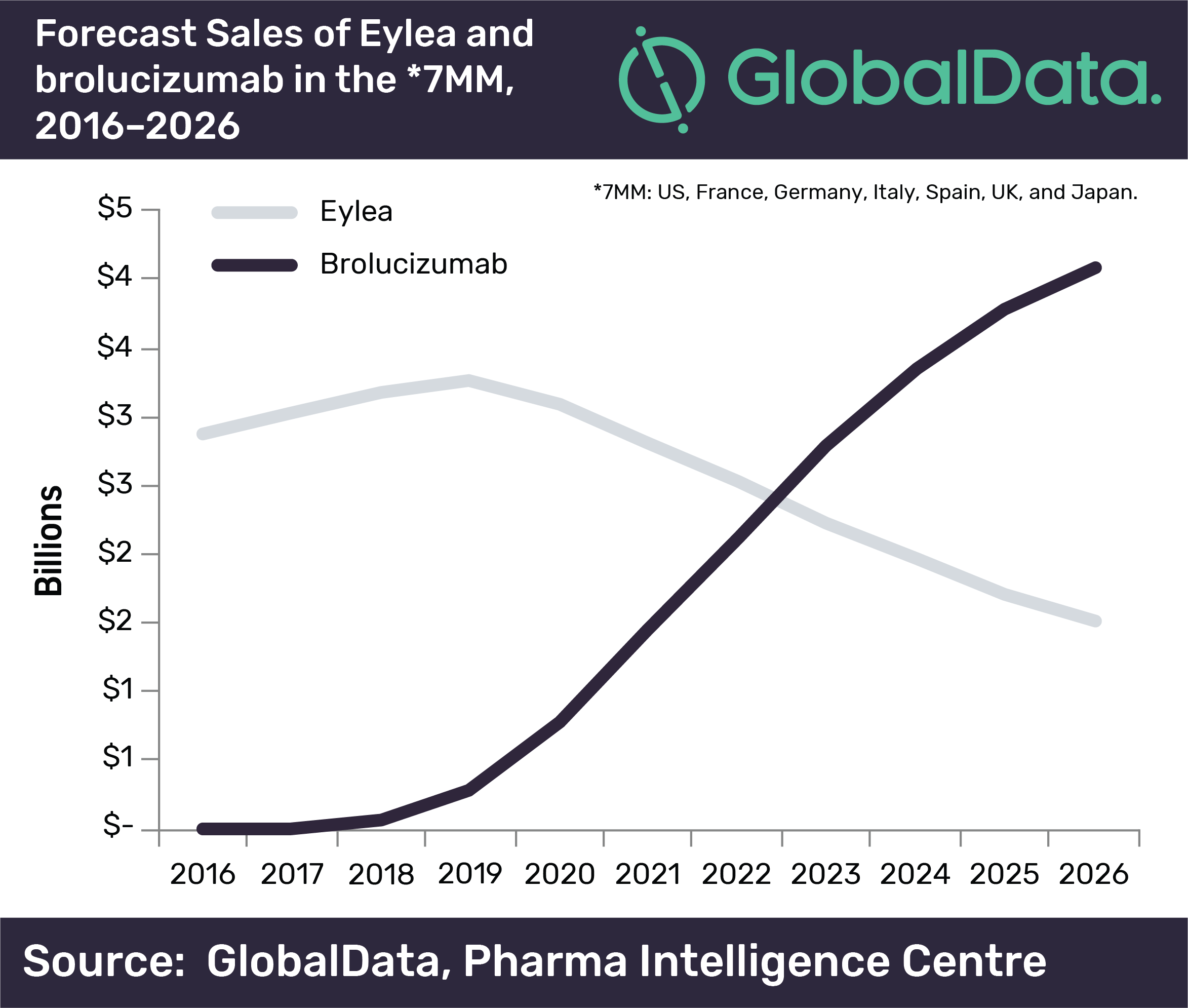 “Brolucizumab will be a strong competitor of Eylea, even if Eylea’s labelling allows for its use in 12-week dosing intervals. GlobalData expects that, with the launch of brolucizumab, Novartis will offset the losses to Eylea and regain dominance in the AMD market. Novartis’ brolucizumab is expected to reach blockbuster status by 2021, and will be the highest selling drug by 2026 in the wet AMD space with sales of $4.1bn in the 7MM, while Eylea sales for wet AMD will decrease from $2.9bn in 2016 to $1.5bn by 2026, according to GlobalData.”