Female contraceptive market set to be worth $8.7bn by 2027 following the expected release of four new drug candidates, says GlobalData

Contraceptive market sales were estimated to be $6.3bn across the 8MM* in 2017, which is expected to grow to $8.2bn in 2027, at a compound annual growth rate of 2.7%, according to GlobalData, a leading data and analytics company. 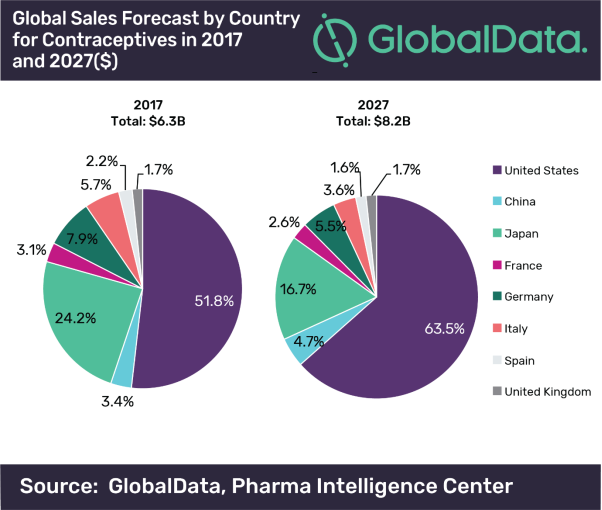 The majority of contraceptives sales will come from the US, attributable to the new product launches. Japan’s sales will fall at a negative CAGR of 1.1% by 2027 as a result of a decreasing female population.

Presently, marketed contraceptives can cause damaging side effects and are one of the main reasons why patients may decide to discontinue contraceptive use, leading to unintended pregnancies. Therefore, the launch of the four drugs will fill important unmet needs and shape the contraceptive space.

“In particular, key opinion leaders (KOLs) interviewed by GlobalData highlighted Mithra’s Estelle, fifth-generation combined pill in Phase III trials, which contains estetrol (E4) 15 mg designed to reduce estrogenic side effects and thrombotic risk, while the progestin, drospirenone (DRSP) 3 mg, reduce side effects, such as bloatedness, and premenstrual dysphoric disorder (PMDD). Furthermore the additional benefit of this pill designed to reduce dysmenorrhea is anticipated to add to its success.”

An interesting product in Phase III is Evofem’s Amphora, which is a non-hormonal vaginal gel designed to maintain an acidic environment, which is inhospitable to sperm as well as certain pathogens. If it proves effective against certain investigated sexually transmitted disease (STD) prevention, its dual benefit will make this contraceptive a desirable method of contraception.