Fintech industry is going through good times with investor confidence rapidly catching up in this space across the globe, observes GlobalData, a provider of business informatics and analytics.

A deeper look into the venture capital (VC) investments in fintech suggests that the gradual increase witnessed since 2014 has now shown a spurt in 2017.

In the first three quarters of 2017, 455 investment cases have been announced for bands above $5 million, marking a surge of 23% over the average annual 369 investments for the preceding 3 years. On the other hand, the sub $5m segment witnessed a drop of 22% in the number of investments this year over the corresponding period. 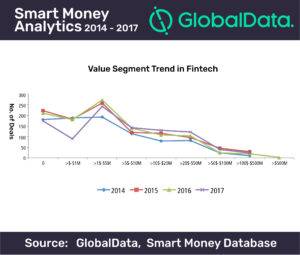 Ameet Phadnis Research & Analysis Director for Financial Services at GlobalData says: “It is evident from the rise in investments that a lot of new ideas are getting funded in fintech space, thereby offering good scope of innovation and disruption.”

Although VC investments in the fintech space in Q3 2017 have dropped by 7% in value terms over Q3 2016, the average deal size has surged by 26% to $19 million from $15 million, clearly reflecting rising investor confidence.

The study has shown some interesting changes in the geographic spread. Unlike 2014, the investment has gradually spread across the globe.

Phadnis adds: “The other markets are steadily grabbing share from the US, thereby reducing its dominance from nearly 60% share in 2014 to about 43% in 2017.”