Right from healthcare, customer service, security patrols, and education & entertainment, startups are offering robotics-enabled solutions ranging from last mile delivery to industrial automation. Against this backdrop, the Unicorn Prediction Model of GlobalData, a leading data and analytics company, has released a list of 50 robotics startups that have the potential to become unicorns (valuation > US$1bn).

Apoorva Bajaj, Practice Head of Financial Markets at GlobalData, says: “Advances in AI have enabled the development of robots, allowing them to become highly complex products rather than being the stand-alone, fixed-function machines they used to be. With the expansion of the roles that robots can perform, deep-pocketed venture capital (VC) firms are attracted to invest in the high-growth opportunity. VC funding has been gradually shifting towards early and growth stage startups in recent quarters with funding for seed stage startups declining.”

GlobalData’s recent report, Future Robotics Unicorns – 09 September 2021, reveals the fact that the although the volume of VC funding has slowed down in recent quarters, but investments in value terms has increased in 2021, showing a sudden spike in Q2 2021 with investment in excess of US$ 6.5bn spanning 177 deals globally. In Q2 2021, Asia-Pacific accounted for over 44% of VC deal volume valued at a total of US$ 2.7bn, followed by North America (primarily the US.) accounting for 31% of the total deal volume. 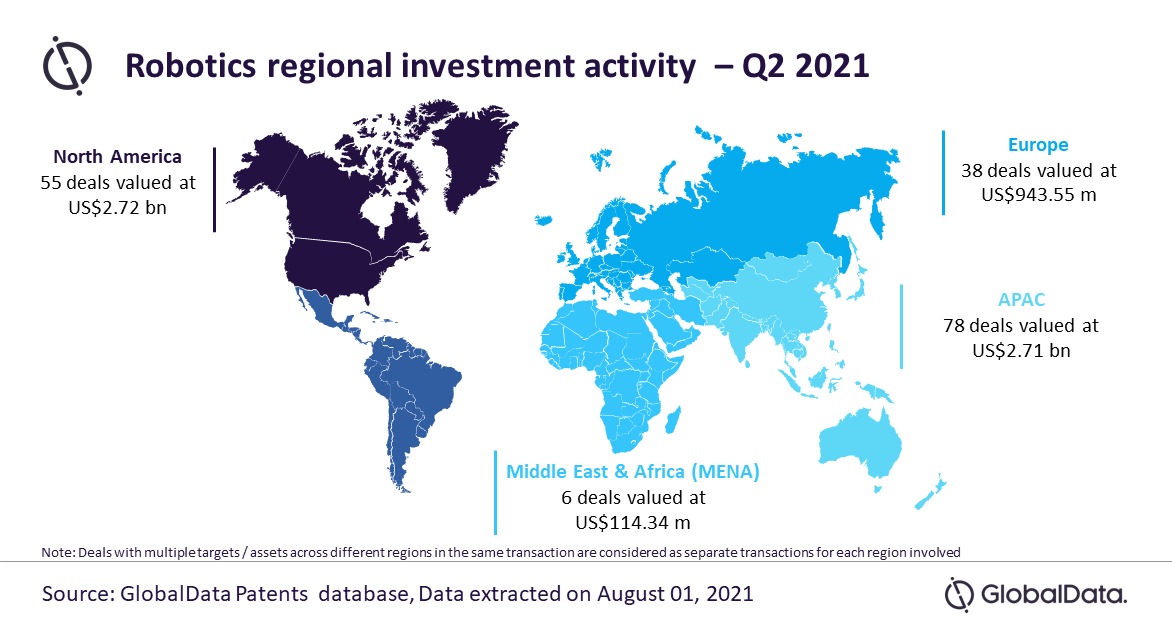 In terms of social media discussions, ‘robotics’ and its use cases in automotive, agriculture, healthcare and other sectors are increasingly being mentioned by social media influencers. Tesla announcing its plan to build a humanoid robot (Optimus) to Hyundai buying controlling stake in Boston Dynamics are some of the recent trending robotics discussions on social media platforms.

Some of the robotics startups in GlobalData’s list of potential unicorns include Gecko Robotics, Covariant, Superpedestrian, and Sphero.

Gecko Robotics builds and operates robots to automate infrastructure inspections across power, gas, oil, and manufacturing industries. Gecko’s software portal allows clients to review all their assets in 3D, ensuring a holistic view of the equipment and prioritizing areas that needs urgent attention.

Covariant designed a universal AI to enable robots to see, reason, and act in the real world. Based on research in deep imitation learning, deep reinforcement learning and meta-learning, the company has built Covariant Brain, a universal AI for robots that can be applied to any use case or customer environment.

Mr. Bajaj concludes, “While innovation in robotics is entering into a stabilization phase as evident by declining deal volumes and patents activity, but its adoption is increasing as corroborated by more number of mentions of ‘robotics’ in corporate filings and continued increase in active job counts across industries including TMT, healthcare, industrials and retail.”