Takeda’s Market Cap during Q1 2019 grew to US$63.4bn, at the back of its takeover of Irish pharmaceuticals firm Shire Plc.

Quentin Horgan, Pharmaceutical Data and Analytics at GlobalData, comments: “Takeda is the new entrant in the list, replacing Biogen Inc. Takeda’s merger with Shire coupled with strong growth in drugs such as Azilva (Azilsartan), which reported a 36% increase in sales in Q1 2019, saw its revenues almost double from the fourth quarter (Q4) 2018 to Q1 2019.” 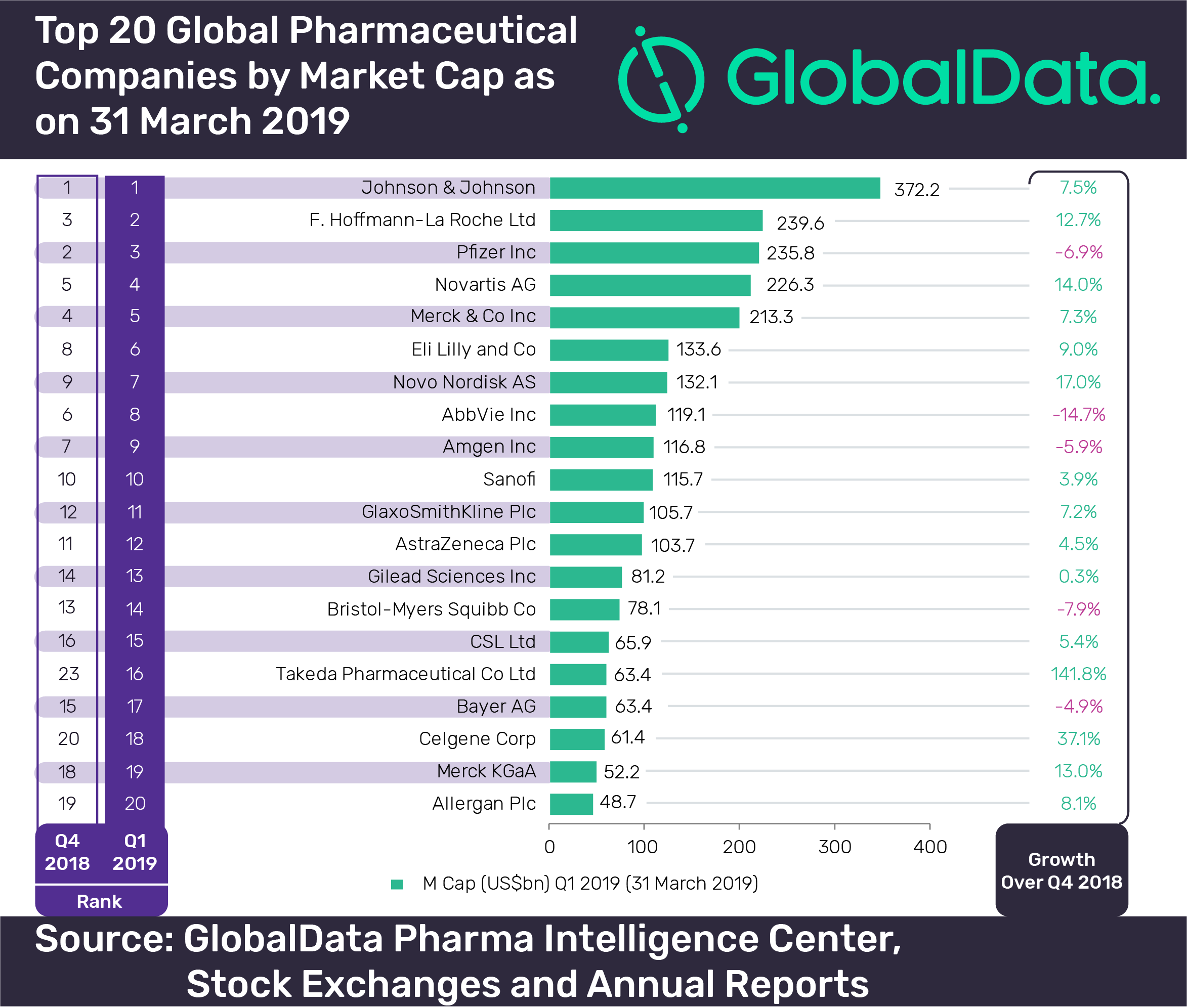 This data can be found in GlobalData’s Pharmaceutical Intelligence Center Financials Database.  Celgene Corp’s share price grew from US$64.09 in Q4 2018 to US$87.45 at the end of Q1 2019, following its impending merger with Bristol-Myers Squibb Co.

Novo Nordisk AS too reported significant improvement in its share price, which closed at DKK348.4 as on Q1 2019, against DKK 297.9 at the end of Q4 2018. The rally in share price was due to its strong performance in diabetes care and obesity markets, and positive regulatory approvals helped Novartis AG to expand its Market Cap.

Horgan explains: “For Novartis the Zolgensma launch has been successful with predicted sales for 2019 reaching US$332mn and is predicted to cross the billion dollar mark in 2020, whilst the recently launched Mayzent’s predicted sales are less impressive but is still predicted to reach over a billion by the year 2023.”

Other notable movements include Roche moving up a place to second in the ranking, with Pfizer slipping a place to third.

Roche was favorably benefited from key blockbuster drugs such as Ocrevus (Ocrelizumab), which registered 23% growth; and others such as Kadcyla (Trastuzumab Emtansine) and Hemlibra (emicizumab-kxwh), which saw 16% and 96% growth, respectively, during the period.

Among the five pharma companies which suffered Market Cap decline in Q1, AbbVie registered more than 10% QoQ decline as a result of the weakening European sales of its arthritis medication Humira following the introduction of biosimilar competition.