Metaverse has become a buzz word and went mainstream in 2021, followed by its adoption in various industries beyond technology as industry leaders see the virtual realm as key to the Internet’s next phase. Against the backdrop, the Social Media Analytics Platform of GlobalData, a leading data and analytics company, has revealed the list of top 10 metaverse influencers on Twitter in 2021, based on Global Score.

Global Score is the measure of the influence of a Twitter contributor, which is calculated using average engagements received on content shared, number of followers and number of times other influencers have referred him/her in their shared content. 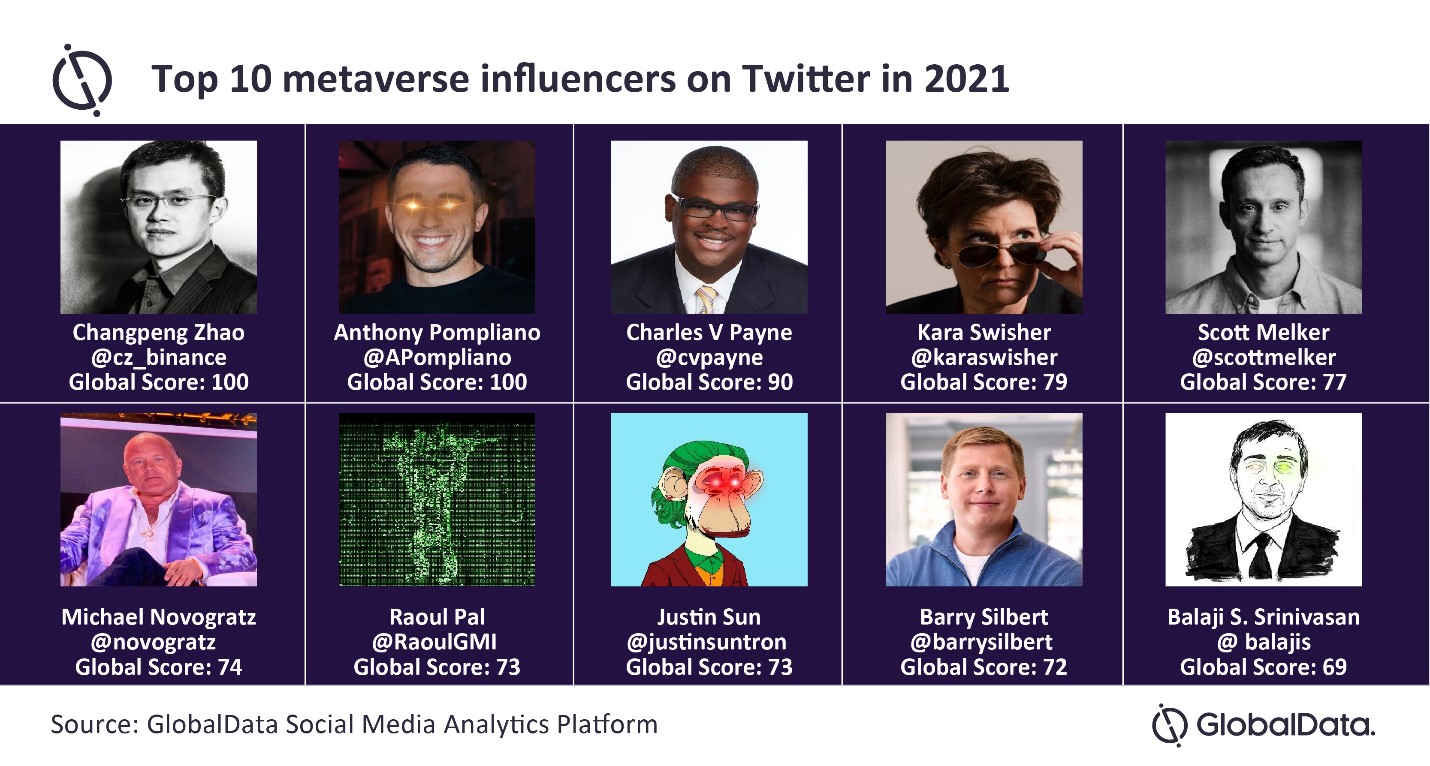 Changpeng Zhao, Founder and CEO of the World’s largest cryptocurrency exchange Binance has emerged as the top influencer among the metaverse experts with a Global Score of 100. Zhao mostly shares updates on investment in metaverse, metaverse cryptocurrency, NFT and crypto wallet.

Anthony Pompliano, Investor at Pomp Investments, has also emerged as the top influencer on metaverse. Pompliano, an entrepreneur and investor, has already invested in more than 100 early-stage companies. He generally shares updates on business and investing related to emerging technology.

Pompliano is followed by Charles V Payne, with a Global Score of 90. Payne is the Founder and CEO of Wall Street Strategies, Inc and hosts American Fox Business Network.

Smitarani Tripathy, Social Media Analyst at GlobalData, comments: “Discussions among Twitter influencers related to metaverse in 2021 have witnessed a sharp upward trend since the beginning of the third quarter, as companies are trying to weave their businesses into the metaverse. Facebook rebranded itself as ‘Meta’, highlighting a shift to an emerging computing platform focused on virtual reality.

Beyond the technology industry, metaverse as a concept has penetrated other industries such as fashion, automotive and consumer goods. ‘Coinbase Inc (Coinbase)’, ‘ROBLOX Corp (ROBLOX)’, ‘NIKE Inc (NIKE)’, ‘Nvidia Corp’, ‘Adidas AG’, ‘Anheuser-Busch InBev’, ‘Balenciaga’, and ‘Hyundai Motor Company’ were some of the top mentioned companies among metaverse influencer discussions on Twitter during 2021.”

Influencers’ discussions around Coinbase surged as the company announced its plan to make Identity Tools to access metaverse and store NFTs. Similarly, influencer conversations also jumped when NIKE teamed up with ROBLOX to create its virtual world ‘Nikeland’ to feature its footwear. NIKE also acquired RTFKT studios, a virtual sneakers and collectibles, indicates its leap on digital transformation with metaverse.

Tripathy concludes: “Discussions among influencers were mostly revolved around the investment in metaverse and its adoption by both tech and non-tech companies. They expect metaverse to explode in 2022 in various industries including fashion, real-estate, fintech, insurance, consumer goods, and automotive.”