The performance highlights of the top 20 publicly traded global pharma companies by market cap for the year ended December 31 2018 have been confirmed in the latest research from GlobalData, a leading data and analytics company.

The pharma sector’s 2018 versus 2017 year-on-year performance was disappointing, as 14 companies in the top 20 list recorded negative growth, with six companies seeing their market cap fall by more than 15%. Among the positive performances, six companies grew in double digits, with CSL, Eli Lilly, and Merck & Co reporting remarkable market cap growth of 32%, 29%, and 28%, respectively. 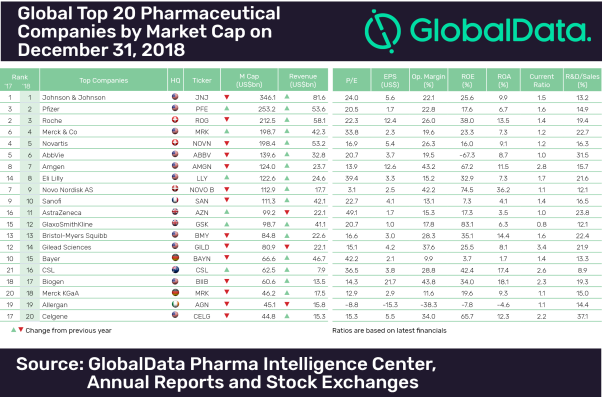 On December 31, 2018, Johnson & Johnson (J&J), Pfizer, and Roche retained their market position as the top three players based on market cap.

Sharon Cartic, an Associate Director of Business Fundamentals in the Databases and Analytics team at GlobalData noted that, “The year 2018 reflected a trend by big drug manufacturers, who continued to focus on their strongest areas, which is visible from the completed and planned divestitures of consumer health, generic, and other divisions by top companies including J&J, Pfizer, Novartis, Bristol-Myers Squibb, Bayer, GSK (GlaxoSmithKline), Merck KGaA, and Sanofi, among others. Interestingly, 2018 closed with the high-profile deal announcement of a US$74B acquisition between Bristol-Myers Squibb and Celgene.”