Vinneth Bajaj, Associate Project Manager at GlobalData, comments: “The companies saw a collective 1.1% drop in production in H1 2021, compared to H1 2020, due to barriers such as lower ore grades, the sale of assets, reduced mill throughput and lower recoveries. While this production is now expected to recover in H2, overall output for 2021 will remain relatively flat, keeping around 27-28moz.” 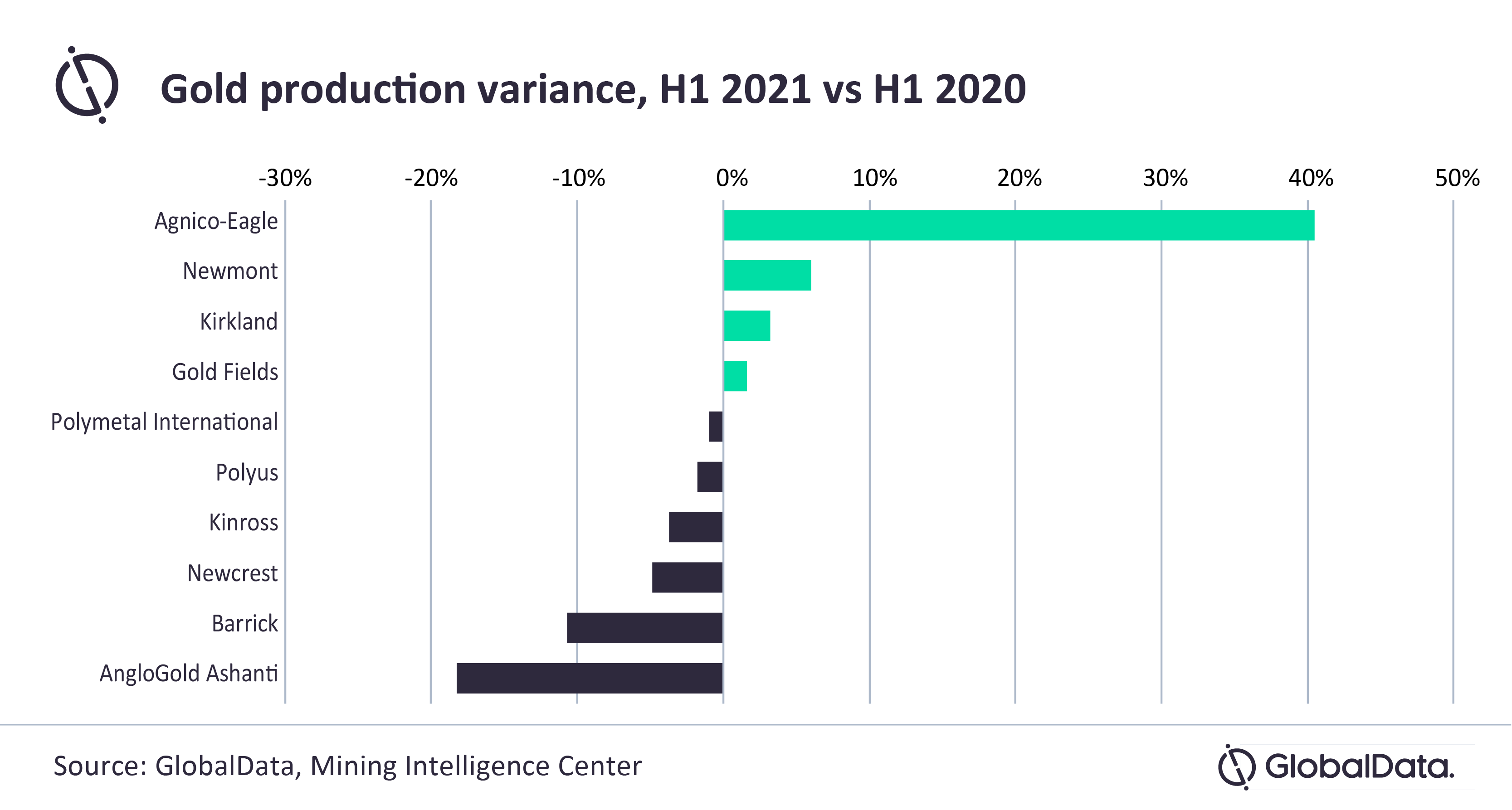 Of the top ten gold producers, the highest production increase in H1 2021 came from Agnico Eagle due to increased mining and milling rates, as well as higher grades at the Meadowbank Complex. The company also saw higher throughput at its Meliadine site. Meanwhile, the companies within the top ten producers that saw the most significant falls in production during H1 were AngloGold Ashanti (a 6.1% loss), Barrick (12.9%) and Newcrest (7.1%). The collective output from these companies declined to 4.4moz in H1 2021 from nearly 5moz in H1 2020.

Bajaj continues: “While AngloGold’s Q1 operations were affected by operational challenges such as low ore grades, lower mill throughput and increased operational costs, Q2 operations were impacted by both the pandemic and the suspension of underground mining activities at Obuasi following a fall-of-ground incident in May 2021.

“Meanwhile, Barrick’s output was impacted due to the transition of its Goldstrike autoclave from acid to alkaline ore, a drop in the amount of ore processed at the Carlin roasters during Q1 2021, and a failure at one of the two mills at the Carlin mine in Q2 – coupled with extended planned maintenance shutdown at the Turquoise Ridge’s Sage autoclave. In addition, lower recovery and throughput at several mines further reduced the H1 2021 production.”

GlobalData has identified the top five countries for gold production: China, Australia, Russia, the US and Canada. Overall, production from these countries is expected to increase by 5.7% to 50.8moz in 2021.

Bajaj comments: “Production in China, after reaching an all-time high in 2014 and a subsequent downtrend, is expected to grow by around 4% in 2021. The country has been tackling issues related to frequent policy changes and depleting ore reserves, to which the pandemic became an additional challenge in 2020.”

Production in Indonesia will increase by 13.7% owing to a rise in output from Grasberg — among the world’s five largest gold mines — following a transition to underground activities during H1 2019. Following steep declines in 2020, production is also expected to increase in Canada and Western Africa in 2021.