Lung cancer incidence rates in men are decreasing, but rates for women are increasing worldwide

26 Jul 2019
Lung cancer incidence rates in men are decreasing, but rates for women are increasing worldwide

As World Lung Cancer Day approaches on August 1st, it serves as a reminder that lung cancer remains a major public health issue, particularly for women. The diagnosed incidence rates of lung cancer have been increasing worldwide among women but decreasing among men. Diagnosed incident rates are higher in men compared to women in the seven major markets (7MM*) in 2019. However, we may see a decrease in the difference between rates for men and women in the future, according to GlobalData, a leading data and analytics company. 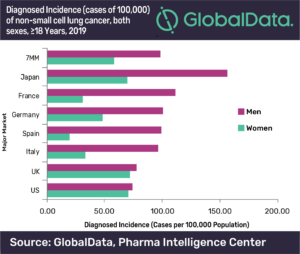 Nanthida Nanthavong, MPH, Associate Epidemiologist at GlobalData, comments: “Women may see a higher burden of lung cancer in the future, especially if rates continue to increase, highlighting that there is a need to address lung cancer at a sex-specific level.”

The incidence of lung cancer has been decreasing in countries such as the US and UK due to public health initiatives and tobacco control policies. However, low- and middle-income countries are seeing an increase in incidence rates due to the tobacco epidemic.

Nanthavong concludes: “Lung cancer has one of the lowest five-year relative survival rates out of all cancers, especially for patients in advanced stages. However, improving public health policies, developing better screening tools and effective treatment is vital for decreasing the number of new cases of lung cancer and improving survival rates.”