Bank of America and JP Morgan were the top M&A financial advisers by value and volume in the construction sector for Q1 2022, finds GlobalData

09 May 2022
Bank of America and JP Morgan were the top M&A financial advisers by value and volume in the construction sector for Q1 2022, finds GlobalData

Bank of America and JP Morgan have been identified as the top M&A financial advisers in the construction sector in Q1 2022 by value and volume, respectively, according to the latest Financial Advisers League Table by GlobalData. The leading data and analytics company’s Financial Deals Database reveals that Bank of America achieved the top ranking by value by advising on $21.9 billion worth of M&A deals. Meanwhile, JP Morgan led by volume, having advised on a total of eight deals.

According to GlobalData’s report, ‘Global and Construction M&A Report Financial Adviser League Tables Q1 2022’, a total of 1,048 M&A deals worth $91.4 billion were announced in the sector during Q1 2022.

Aurojyoti Bose, Lead Analyst at GlobalData, comments: “Bank of America is the only adviser that managed to surpass the $20 billion mark during Q1 2022. Of the six deals advised by Bank of America, five were billion-dollar deals* that also included two deals valued more than $5 billion. The firm’s involvement in these big-ticket deals helped it to top the chart by value. Moreover, it also occupied the third position by volume.

“Similarly, JP Morgan, apart from leading by volume, also occupied the second position by value as it managed to advise on five billion-dollar deals*.” 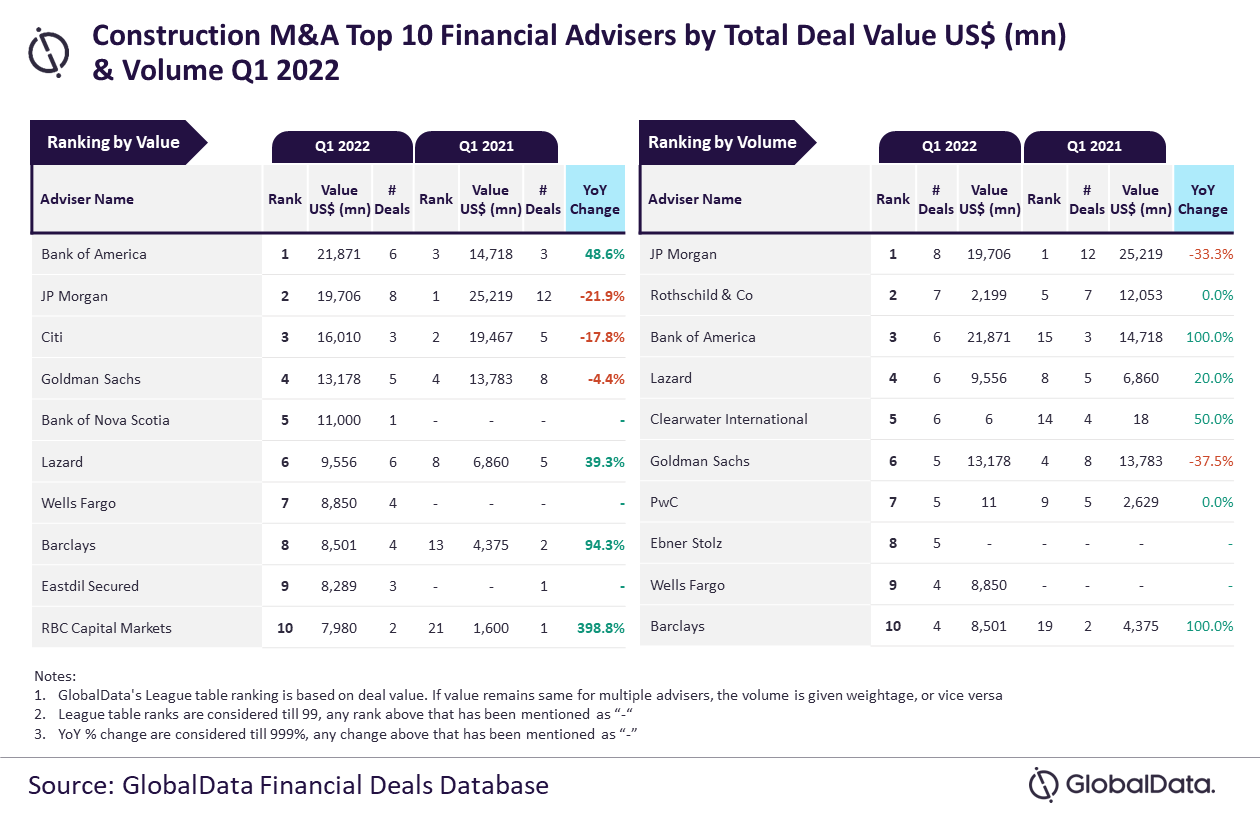 An analysis of GlobalData’s Financial Deals Database reveals other high rankers by value included JP Morgan, with deals worth $19.7 billion; Citi, with $16 billion; Goldman Sachs, with $13.2 billion; and Bank of Nova Scotia, with $11 billion. By volume, Rothschild & Co occupied the second position, with seven deals; followed by Bank of America, with six deals; Lazard, with six deals; and Clearwater International with six deals.

*Valued more than or equal to $1 billion.