In September 2022, the number of jobs available for application (‘active jobs’) continued to fall, according to GlobalData, as the pace of job closures and removals from career pages (the ‘jobs closure rate’) was higher than the rate of new job postings. The leading data analytics company notes that the decline in active jobs is most likely due to rising inflation and cost-cutting efficiencies.

An analysis of GlobalData’s Job Analytics Database revealed that the active jobs index for all sectors declined by 7% month-on-month in September 2022, while maintaining a healthy 54% increase over pre-COVID numbers. New job postings dipped by 3% while job closures increased by 4%.

Sherla Sriprada, Business Fundamentals Analyst at GlobalData, comments: “In Q3 2022, GlobalData’s active jobs index in various sectors such as technology, retail, pharma, and power continued to fall, indicating that companies across most of the sectors are being extra cautious when it comes to hiring. However, in the healthcare sector, active jobs index rose by 7.5% during September 2022. Key recruiters in the healthcare sector include Evolent Health Inc, Tenet Healthcare Corp, AdventHealth, and UPMC Health System.” 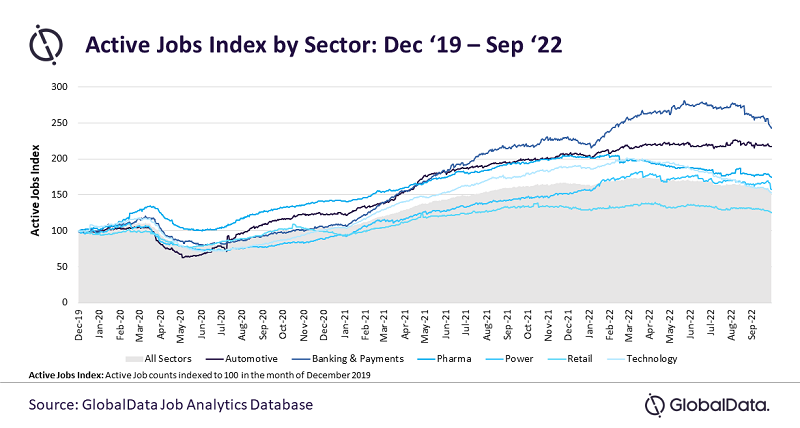 Sectors that witnessed a month-on-month dip in the active jobs index include technology, automotive, retail, and pharma by 9.2%, 5.9%, 5.8%, and 3.6%, respectively. As well as analyzing by sector, GlobalData’s Job Analytics Database also reveals that the global active jobs index declined by 6.7% month-on-month in September 2022. New job postings dropped by 2% while job closures increased by 5%.

Sriprada adds: “As the market conditions remain volatile, we see several key markets showcasing a month-on-month decline in hiring activity. For instance, the month-on-month drop in active jobs index for India, the UK, Australia, the US, and China was 19.3%, 6%, 7.2%, 6%, and 4.2% in September 2022 respectively.”

Over 500 jobs were posted for newly created roles in September 2022, highlighting that companies are interested in hiring employees for various new roles and teams focusing on innovation and business performance. AstraZeneca Plc posted a new role for ‘Senior Director, Innovation in Care’. Block Inc started hiring for its newly formed shopping platform team.

Sriprada concludes: “Several companies also announced layoffs during September 2022. For instance, the BBC announced significant reductions in its World Service output, resulting in 226 job losses in the UK and 156 internationally, Royal Bank of Canada laid off 1% of jobs in its US investment banking unit, Gap laid off around 500 corporate jobs in the US and Asia, and Goldman Sachs laid off 25 investment bankers in Asia.”