Global venture capital investment down by 16% in Q1 2022 but stays resilient, finds GlobalData

The global venture capital (VC) investment, impacted by macroeconomic trends, recorded a 16% quarter-on-quarter (QoQ) decline to reach $195bn in Q1 2022. North America accounted for around $95bn in terms of deal valuation. During the same period, there is a QoQ 11% fall in unicorn births, finds GlobalData, a leading data and analytics company.

Abhishek Paul Choudhury, Senior Disruptive Tech Analyst at GlobalData, comments: “The global economy is struggling with the ripple effects of the Russia-Ukraine war coupled with supply chain challenges and capital market volatility. There are concerns around Omicron cases in a few major countries. Considering such events which are pushing up the inflation and interest rates, the VC and unicorn markets can be termed as relatively strong.”

An analysis of the Deals Database of GlobalData’s Disruptor Intelligence Center shows the fluctuating trend of VC activities and unicorn births during 2021 and a QoQ drop during the last quarter. 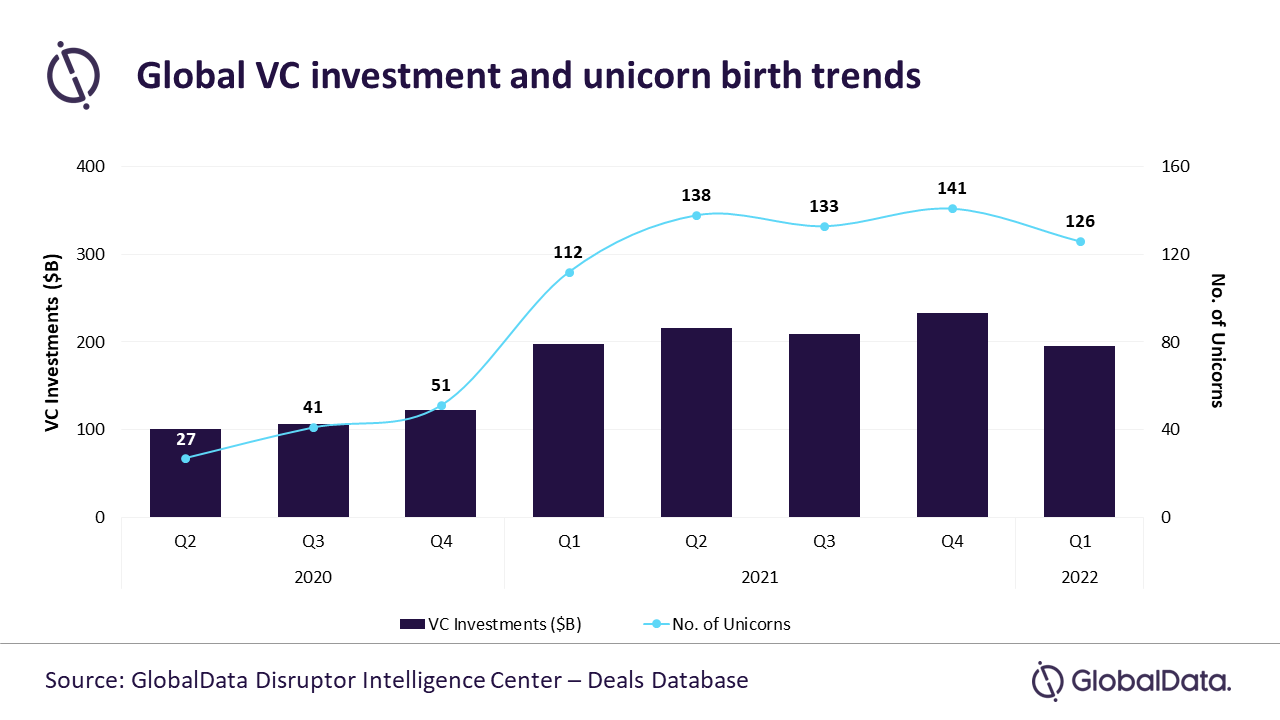 The notable technology themes that garnered attention during the quarter were digital media, artificial intelligence (AI), cloud, e-commerce, big data, and blockchain. Among the top 10 deals, fintech and digitalization broadly dominated the investments.

Although the birth of unicorns marginally declined as compared to the previous quarter, there was a 13% cumulative growth to a total of 1,092 and the valuation trend showed 13% QoQ growth. RealtimeBoard, ConsenSys Software, and RELEX were the top three companies in terms of valuation.

Choudhury concludes: “The market showed resilience to the economic headwinds during the reporting period and is estimated to grow further owing to the rising demands for the incorporation of emerging tech-enabled solutions across various sectors. Moreover, post-money valuations suggest a constantly growing universe of unicorns.”

TSMC’s second US fabrication facility de-risks both the semiconductor supply chain and the Taiwan situation, says GlobalData
Ample opportunities for utilities willing to invest in EV infrastructure, says GlobalData
Cost of living crisis and trade wars are just some of the factors that are deglobalizing the sustainability agenda, says GlobalData
Technology partnerships around genomic profiling to drive cancer care towards precision medicine in India, says GlobalData
Meta’s GDPR fines will only add to its woes, says GlobalData