Mexico will need US natural gas for the next decade, despite energy sovereignty claims, says GlobalData

05 Mar 2019
Mexico will need US natural gas for the next decade, despite energy sovereignty claims, says GlobalData

“Without a comprehensive strategy that considers development of large natural gas resources, both onshore and offshore, it will be difficult to reduce the volume of imports demanded for power generation and industrial use. On the other hand, interconnection of US and Mexico natural gas markets appears to work, and at present, the cheap natural gas from Texas seems a far more convenient option for Mexico than having to face permanent and systematic shortfalls of supply.

“In the short and mid-term, Mexico’s natural gas production decline could be alleviated by developing key upstream projects but this is unlikely given the current strategy led by the Mexican government. Pemex still has a dominant position with respect to the operatorship of existing gas reserves, but any key development in, for instance, unconventional or deep water production will be capital intensive and the company currently does not have the financial capability to engage individually in large projects. On top of this, the Mexican government has formally announced that no more bidding rounds, including Pemex farm-outs, will be carried out for the time being. 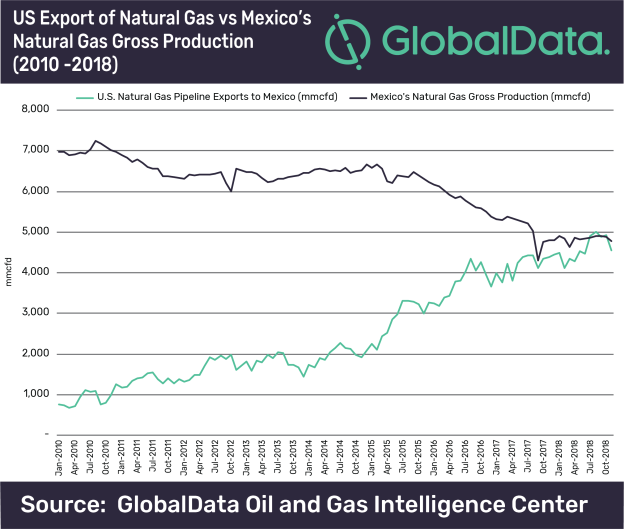 The forecast for natural demand indicates a continuous increase of Mexico’s domestic consumption – surpassing 9 bcfd by 2025 – but the supply forecast for domestic consumption is expected at best to remain in current levels and below 5 bcfd by the same year. This scenario will surely increase the dependency from Mexico on US natural gas over the first half of the next decade. There is also an expected domestic increase in the demand of US natural gas, in particular for new LNG plants in the US Gulf Coast, which could put upward pressure on prices, increasing the economic risk of Mexico’s reliance on US gas.”