Microsoft’s acquisition of Zenimax is another step towards its domination of the games console market, says GlobalData

21 Sep 2020
Microsoft’s acquisition of Zenimax is another step towards its domination of the games console market, says GlobalData

Following the news that Microsoft has acquired Zenimax for $7.5bn;

“Microsoft’s $7.5bn Zenimax acquisition demonstrates how the company wants to dominate the games console market, which will be worth $60bn by 2025, according to GlobalData forecasts. The deal’s inclusion of several prominent game studios, including Bethesda (and with its massively popular titles such as The Elder Scrolls and Fallout) will give Microsoft a powerful boost in its battle with Sony in the next-generation consoles market.

“Microsoft is determined to outpace Sony in the console race. Having priced its new Xbox consoles to match Sony’s PS5, the company will add several high-profile new games to the platform. Zenimax titles such as Wolfenstein, Doom, Quake, Prey and Dishonored will compete with PS5 exclusives such as Spider-Man: Miles Morales, Gran Turismo 7 and Ratchet & Clank: Rift Apart.

“The appeal for Microsoft’s Xbox Series X and Series S consoles will be boosted by the availability of Bethesda’s Starfield alongside the in-house developed Halo Infinite in the coming years, although it remains unclear if Sony will get access to Starfield. The acquisition by Microsoft also means Sony is likely to miss out on future Besthesda titles. However, it will reportedly receive games such as Deathloop and GhostWire: Tokyo, which have already been announced as PS5 exclusives.

“Microsoft currently ranks fourth out of 36 companies in GlobalData’s gaming thematic sector scorecard, which ranks companies based on their competitive positioning in the most relevant themes in the sector. Meanwhile, Sony is further down at 11. Both Microsoft and Sony score of five out of five in the game development theme due to their ownership of leading game studios. With the Zenimax acquisition, Microsoft added eight studios, taking its total to 23, while Sony has 14 worldwide. This is another indication of Microsoft’s growing focus on first-party titles, which GlobalData predicts will be available exclusively on Xbox services and platforms. 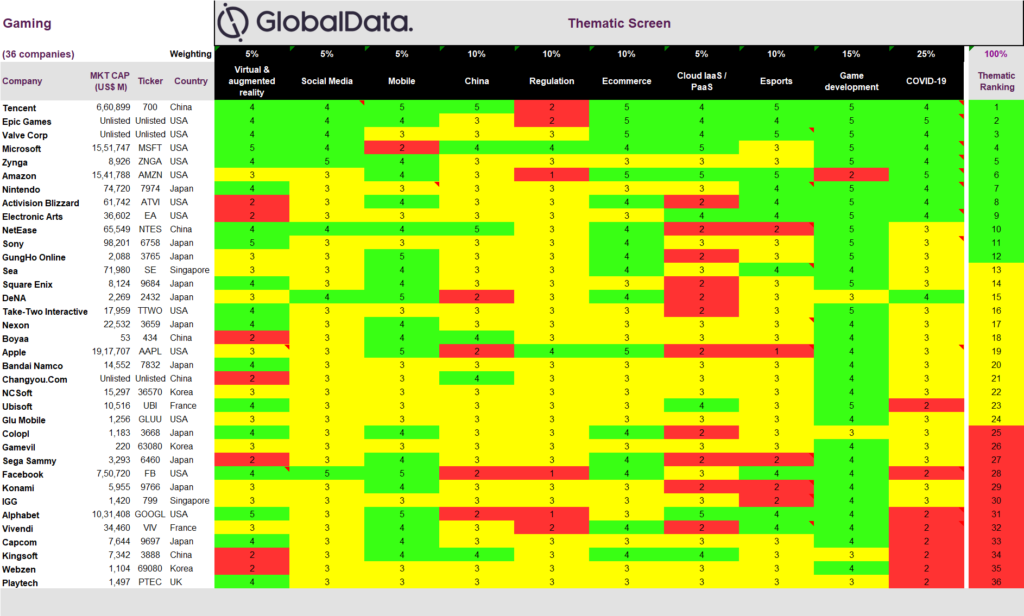