More than two-thirds of world’s megacities will be located in Asia by 2025, says GlobalData

26 Feb 2019
More than two-thirds of world’s megacities will be located in Asia by 2025, says GlobalData

Robust economic growth and rapid urbanization over the last few decades has resulted in the creation of a number of megacities in Asia. Against this back drop, 33 out of the projected 49 megacities will be located in the region, according to GlobalData, a leading data and analytics company.

China to lead with 19 cities out of 33 Asian megacities

The City Economics Database reveals that megacities were home to nearly 8.35% of the world’s population and contributed 15.50% to total global GDP in 2018. Of the world’s 40 megacities in 2018, 26 were located in Asia. GlobalData forecasts that the number of megacities will increase to 49 and more than two-thirds of these megacities (including 19 in China and six in India) are expected to be located in Asia by 2025.

Of the nine cities that are projected to become megacities between 2018 and 2025, five will be from China (Handan, Hangzhou, Harbin, Qingdao and Quanzhou), two from India (Chennai and Hyderabad) and one each from Egypt (Cairo) and Colombia (Bogota).

Rapid expansion of cities has resulted in creating a number of megacities that are larger and bigger, both in terms of population and GDP, than many individual countries. For instance, Tokyo, which is a US$1.50trillion economy, had a greater GDP than that of Spain’s US$1.42trillion while GDP of Shanghai (US$495bn) and Beijing (US$459.6bn) were greater than that of Argentina (US$475.4bn) and Norway (US$439.5bn) in 2018. Furthermore, Asian megacities are expected to contribute 9.4% to the global GDP and 6.6% to the total world population in 2025. 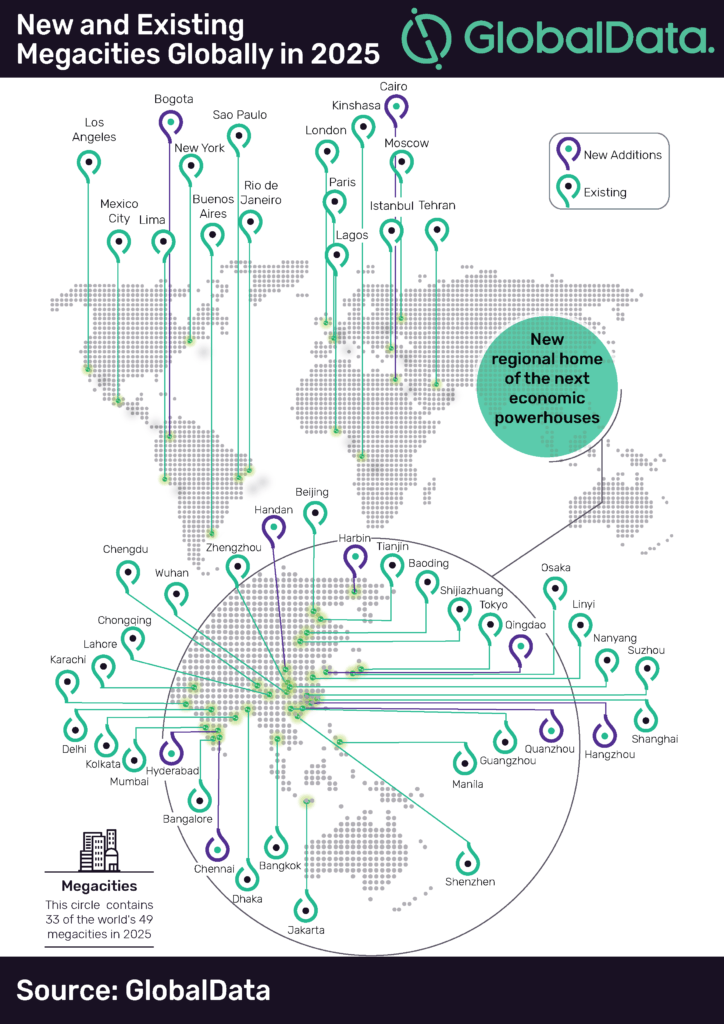 Tarun Bisht, Economic Research Analyst at GlobalData, says: “Though Asian megacities dominate the list of megacities they are far behind their counterparts from the developed world in terms of per capita income, employment generation and living standards. Elevating productivity and creating job opportunities by harnessing favorable demographic characteristics should be the key focus areas to create sustainable megacities.”