For Netflix, the US has been at the forefront of its hiring activity. Of late, the company’s hiring in the Asia-Pacific (APAC) region shows plans to scale growth, boost localization efforts, develop consumer product strategy, and create jobs. Besides countries such as Japan, Singapore, and India, Netflix seems to have renewed focus on South Korea, Thailand, and South East Asia (SEA) region, where listings saw an increase, according to GlobalData, a leading data and analytics company.

Netflix posted around 120 jobs in the APAC region between July-November 2021*, a 43% increase compared to H2 2020. The increase is characterized by listings in most APAC countries, including a spurt of 20 job adverts in South Korea during October 2021, the highest in over a year. In November 2021, there are 32 active jobs open for recruitment that doubled since September 2021. Additionally, Netflix resumed listing adverts in Thailand since June 2021. 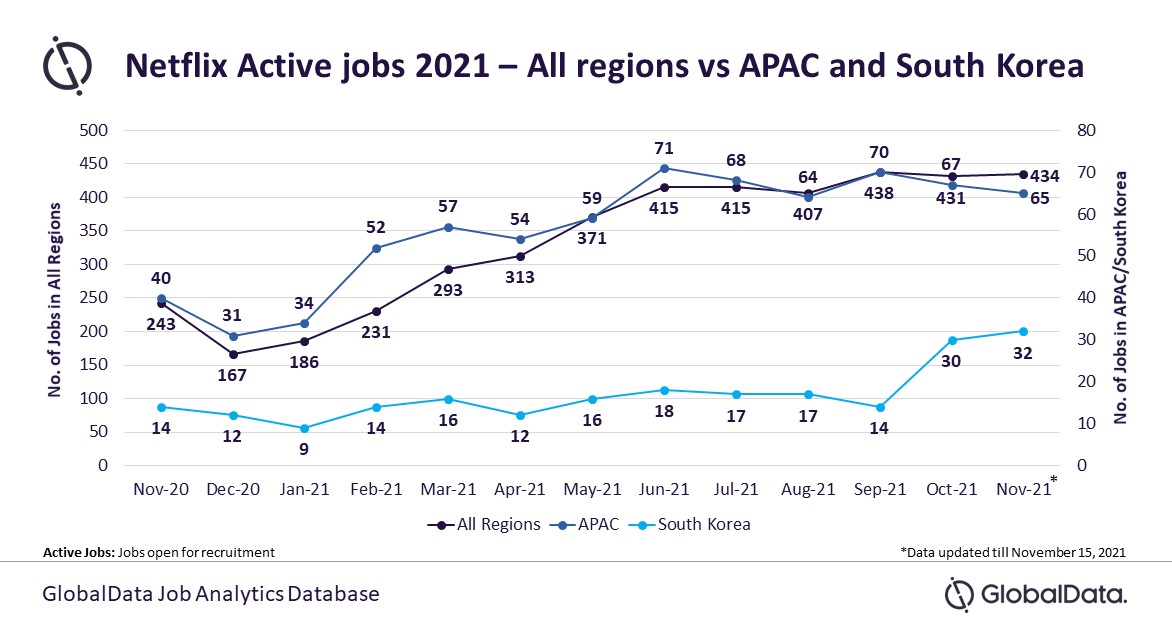 Ajay Thalluri, Business Fundamentals Analyst at GlobalData, says: “The increased hiring in the region comes at a time when paid net membership additions in APAC are 2.2 million, the highest since Q2 2020, claims Netflix. The company is developing creative global localization strategies and building regional partnerships for APAC countries.”

‘Director, Grow Creative – APAC’ role for Australia, Japan, Korea, and South East Asia will fill local talent gaps, upskill workforce, and increase inclusion and diversity. Additionally, Netflix listed recruiter roles in Japan, Singapore, South Korea that hint at its plans for more hires. A role for ‘Talent Coordinator’ based out of Singapore refers to its regionally produced shows such as Squid Game, Bangkok Breaking and Alice in Brotherland.

Netflix is also hiring for its security and intelligence team to assess risks associated with evolving content acquisition strategy and ensure safety of its production and talent across APAC. Additionally, it is steering production and public policy related requirements in Laos, Cambodia, and Philippines.

Thalluri adds: “It is also adapting experiences in different languages of APAC region, besides tracking Korean projects and international originals.”

A South Korea-based listing for ‘Localization Director – APAC’ points to Netflix’s hiring plans in the country. It is also creating an ‘APAC’ version of ‘Grow Creative’ that was launched in the UK in September 2021. Netflix plans to train and develop talent for above and below-the-line jobs pipelines. Netflix is growing its consumer product team in South Korea by developing a cross-channel retail strategy that includes e-commerce. The company looks to create product license and retail strategy for Korea based on its original shows, ‘Manager, Consumer Products – Korea’ shows.

Thalluri concludes: “Coming off the recent release of much-acclaimed shows, Netflix is shaping strategies in the APAC region and more so in South Korea and other SEA countries. Hiring pattern reflects the company’s focus on APAC region as competition for subscribers gathers momentum.”