Oil and gas projects led by Chinese contractors in the Middle East region stand at US$75.3bn

The total value of oil and gas projects awarded to Chinese contractors in the Middle East and North Africa (MENA) region, from stage of announcement to execution, stands at US$75.3bn, of which US$68.1bn relates to projects in execution, according to GlobalData, a leading data and analytics company.

Energy cooperation is at the core of economic relations between China and MENA. China has seen increasing demands for energy resources, while the Middle East has around two-thirds of the world’s total proven oil reserves and outstanding infrastructure in oil transportation and refining.

Yasmine Ghozzi, Economist at GlobalData, comments: “The scope of China’s interest in the Gulf region has increased in recent years from a focus on hydrocarbon trade to a multitude of investments in energy, industry, finance, transport, communications and other technology. Many Gulf countries also perceive China as a useful means in their strategies to diversify not just economically, but also politically amidst US-China trade war.”

Chinese firms have been focusing on projects in the Middle East that lend themselves to the Belt and Road Initiative (BRI) goal of connectivity. Ports and industrial parks have been vital to such cooperation, as they create an economic chain that links China to the Gulf, the Arabian Sea, the Red Sea and the Mediterranean.

Reflecting the expansion of China’s involvement in infrastructure developments in the region, spending on projects that have a Chinese contractor totalled US$13.8bn in 2014 and almost doubled to reach US$24.9bn in 2018. In the summer of 2018, at a meeting of the China-Arab States Cooperation Forum (CASCF) in Beijing, China pledged US$23bn in loans and development aid to the region. This identified the UAE’s Khalifa Port, Oman’s Duqm, Saudi Arabia’s Jizan, and Egypt’s Port Said and Ain Sokhna as key projects that China will develop in association with the BRI in the Middle East. 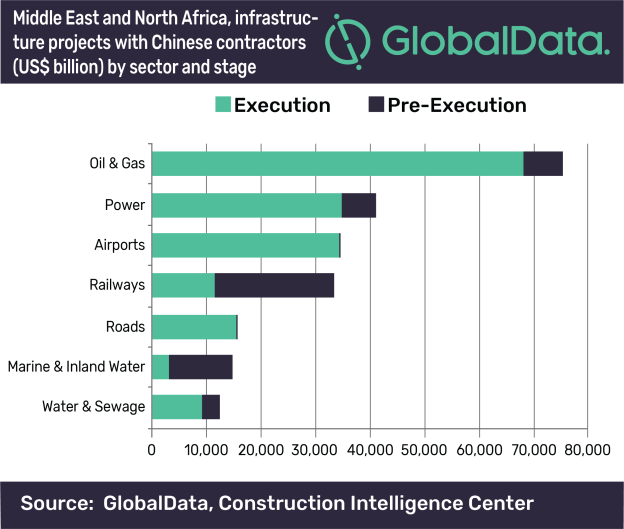 Chinese companies also expressed great interest in hubs across the region, given government initiatives such as Smart Dubai 2021, Saudi Arabia’s National Transformation Program 2030, Morocco’s Mohamed VI Tangier Tech City and the China-Egypt Suez Economic and Trade Cooperation Zone. Internet of things (IoT) and blockchain are central tenets of Smart Dubai 2021, both areas in which Chinese technologists are currently leading. Most of the technology collaboration has started in Gulf Cooperation Council (GCC) countries and Israel, but has high potential to grow across the region, as North Africa.

Ghozzi concludes: “As part of the “digital Silk Road”, satellites are a priority for China in the Middle East. China’s BeiDou satellite navigation system has been used across the Middle East, as it has applications in telecommunications, maritime security, and precision agriculture. Telecommunication companies in Bahrain, Egypt, Kuwait, Saudi Arabia, and the United Arab Emirates (UAE) have all partnered with Huawei to build 5G networks.”