Royal Dutch Shell forecast to spend US$1.5bn in UK decommissioning through to 2025

Royal Dutch Shell are estimated to have over US$3bn in total abandonment and decommissioning expenditure (ABEX) in producing UK oil and gas developments, stacking above fellow UK operators, says GlobalData, a leading data and analytics company.

Of the UK operators, Shell is set to have the largest ABEX liability, of just over US$3bn to abandon producing fields in the UK, and is set to spend as much as half of that value by 2025. This is driven mainly by the Brent oil field but also relates to expenditure in aging developments such as Pierce and Curlew.

Daniel Rogers, Upstream Oil & Gas Analyst at GlobalData, commented, “The total plug and abandonment expenditure alone for the Brent field could reach US$900m and spans from 2008 to 2020 with over 150 wells in total. The decision not to remove the Brent gravity based concrete structures weighing around 960,000 tons due to technical and safety concerns will come with significant cost savings; the decision, however, is being largely disputed by environmentalists and neighbouring countries.”

The two producing fields identified to carry the largest ABEX in the UK are the Brent and Forties oil developments. The combined ABEX for the two fields could reach some US$4bn in total, with Brent expected to cease production in 2020 and Forties not likely until 2030’s.

Daniel continued, “Despite the Forties Production System (FPS) pipeline not due for abandonment in the near future, the removal of the approximately 150,000 tons of platforms at the field could cost the participants some US$700m. This will weigh heavily on current operator Apache Corp and as a result places the company only behind Shell in terms of UK abandonment and decommissioning liabilities from producing assets.” 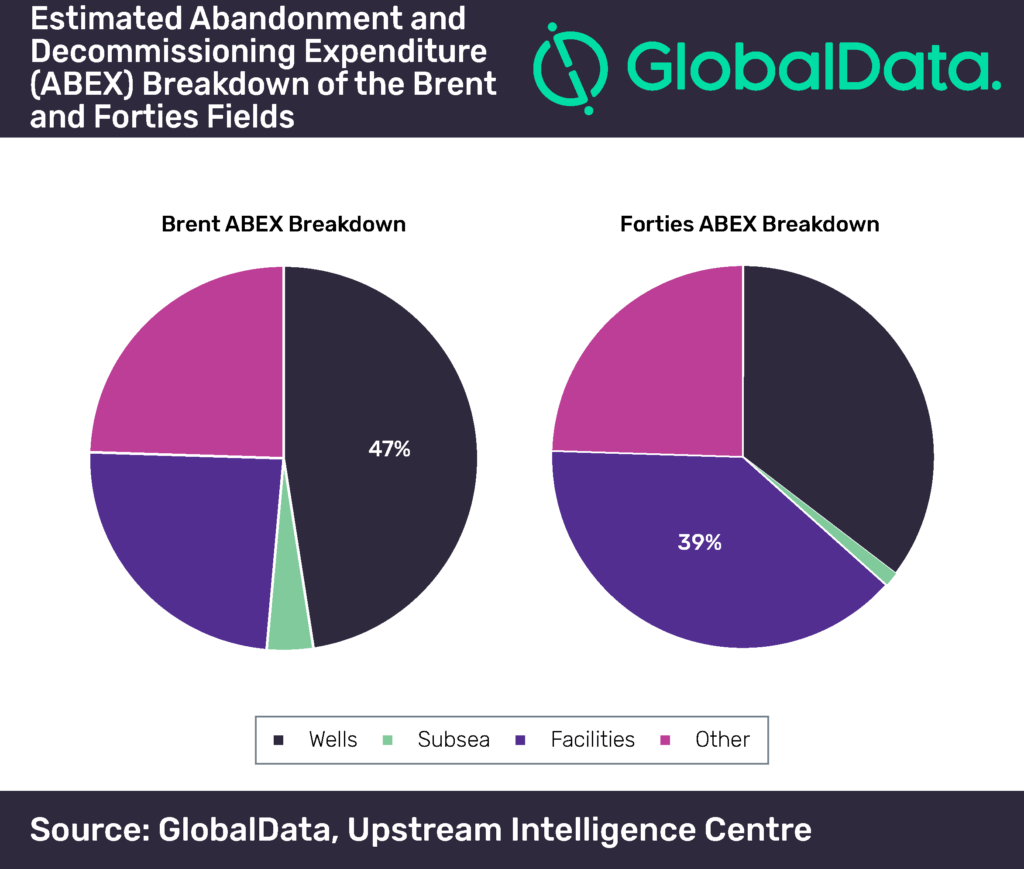 The study also reveals a significant growth in the number of UK asset retirement contracts issued since the industry down turn in 2014, but the number has remained relatively flat since 2016 after a sharp initial rise. Of those contracts, the majority have been Plug and Abandonment (P&A) work scopes, with near term forecast UK ABEX expected to be weighted towards P&A activities.

Daniel added, “We have seen a negative correlation between the number of asset retirement contracts awarded and the price of oil over the last five years. During lower oil prices, reduced profits from producing fields coupled with lower service costs provide a favourable environment for asset retirement activity. Given the recent stabilization of oil price and a push by the UK government to maximize economic recovery from existing assets, the outcome will likely lead to project abandonment delays and rejuvenated investment at legacy fields.”