The human immunodeficiency virus (HIV) therapeutics market was worth an estimated $22.9bn across the seven major markets (7MM*) in 2019. The market is expected to grow at a Compound Annual Growth Rate (CAGR) of 2%, reaching $28bn in 2029, according to GlobalData, a leading data and analytics company.

GlobalData’s latest report, ‘HIV Therapeutics: Global Drug Forecast and Market Analysis to 2029’, reveals that growth in the market will be driven by the entry of injectable therapies that can be administered intramuscularly or subcutaneously.

HIV-infected patients are normally managed with oral therapies. One type of treatment regimen involves the administration of one tablet per day. These single-tablet regimens (STRs) are made up of fixed-dose combinations of individual antiretroviral drugs.

“However, STRs are not without their issues. A key component of multiple drugs is tenofovir disoproxil fumarate (TDF), which has been linked to osteoporosis and kidney disease. There are also people who don’t remember to take their medication, and people who feel embarrassed about living with HIV, which lowers compliance.”

To address these issues, drug developers have examined the possibility of using injectable anti-HIV drugs that can be administered less frequently than STRs and other oral drugs.

Roche’s Fuzeon (enfuvirtide) was the first subcutaneously-administrable drug to be approved for the treatment of HIV-infected patients. However, the fact that the drug is administered multiple times daily has led to difficulties with adherence and the emergence of injection-site related adverse events such as lipohypertrophy, erythema and pruritus.

Crabbe adds: “By 2029, other injectable therapies will be available in the market. CytoDyn’s leronlimab and Gilead Sciences’ Lenacapavir are expected to become available in the US and European markets. Additionally, TaiMed’s Trogarzo (ibalizumab), which is an intravenously administered monoclonal antibody, launched in the US in 2018 and in Europe in 2020.”

ViiV Healthcare’s cabotegravir is an integrase inhibitor that has shown inhibitory activity against viruses that are resistant to elvitegravir and raltegravir. Two injectable cabotegravir-based therapeutics launched in Europe at the end of 2020 and are expected to launch in each of the 7MM.

Cabotegravir-based therapies are projected to generate 79% of the sales of injectable therapeutics in the HIV market in 2029, equating to estimated sales of $1.5bn towards the end of the forecast window. 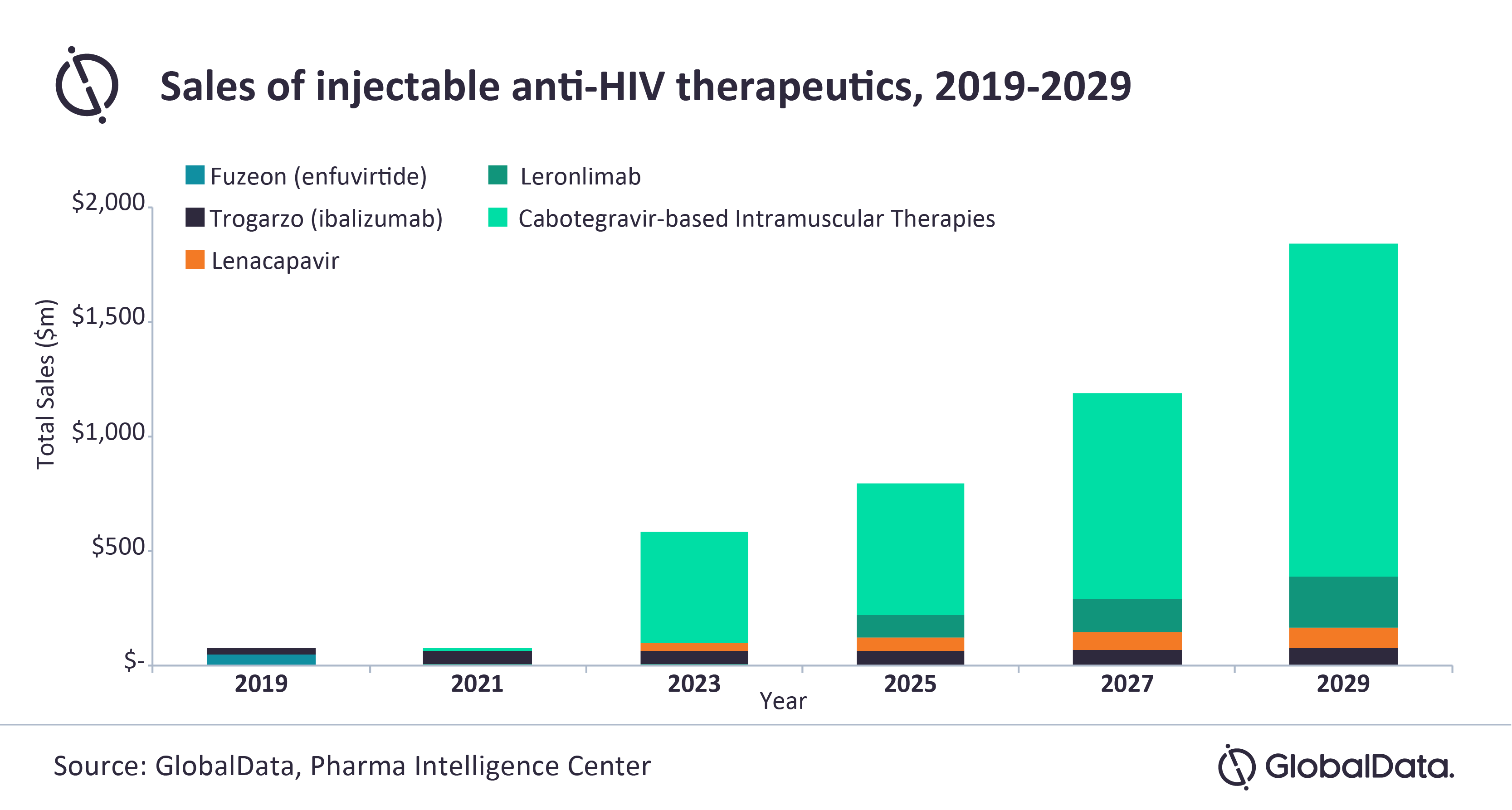 Most of the drugs entering the market between 2019 and 2029 are expected to be used as salvage or add-on therapies that can be used in combination with first-line drugs. Sales of injectable therapies are expected to exceed $1.8bn in 2029.

The current activities of drug developers in the HIV space reflect a desire to meet the needs of patients who have difficulty swallowing or remembering to take their pills. Addressing these longstanding unmet needs will drive growth in the HIV market.

Although injectable drugs will be well received by patients, a significant number of infected people are unaware of their seropositive status because the disease has few recognizable symptoms in its early stages.

Crabbe concludes: “Developing non-oral drugs is one way for pharmaceutical companies to diversify treatment options for patients, but it is equally critical to improve screening programs and reduce the stigma surrounding HIV and AIDS as this will allow patients to confidently seek treatment.”

*7MM: The US, France, Germany, Italy, Spain, UK and Japan