Silver production forecast to rise by 8.1% in 2021 after output was impacted by COVID-19

Global silver mine production is estimated to have declined by 2.4% to 849.7 million ounces (moz) in 2020, the fourth consecutive annual decrease, partly owing to lockdowns and restrictions at top silver-producing countries, particularly Peru, Mexico and China. In addition, depleting ore reserves have been a major concern for the industry in the recent years. However, global silver production is expected to increase by 8.1% in 2021 to 918.3moz and then exceed one billion ounces by 2024 – a 3.2% compound annual growth rate (CAGR), says GlobalData, a leading data and analytics company. 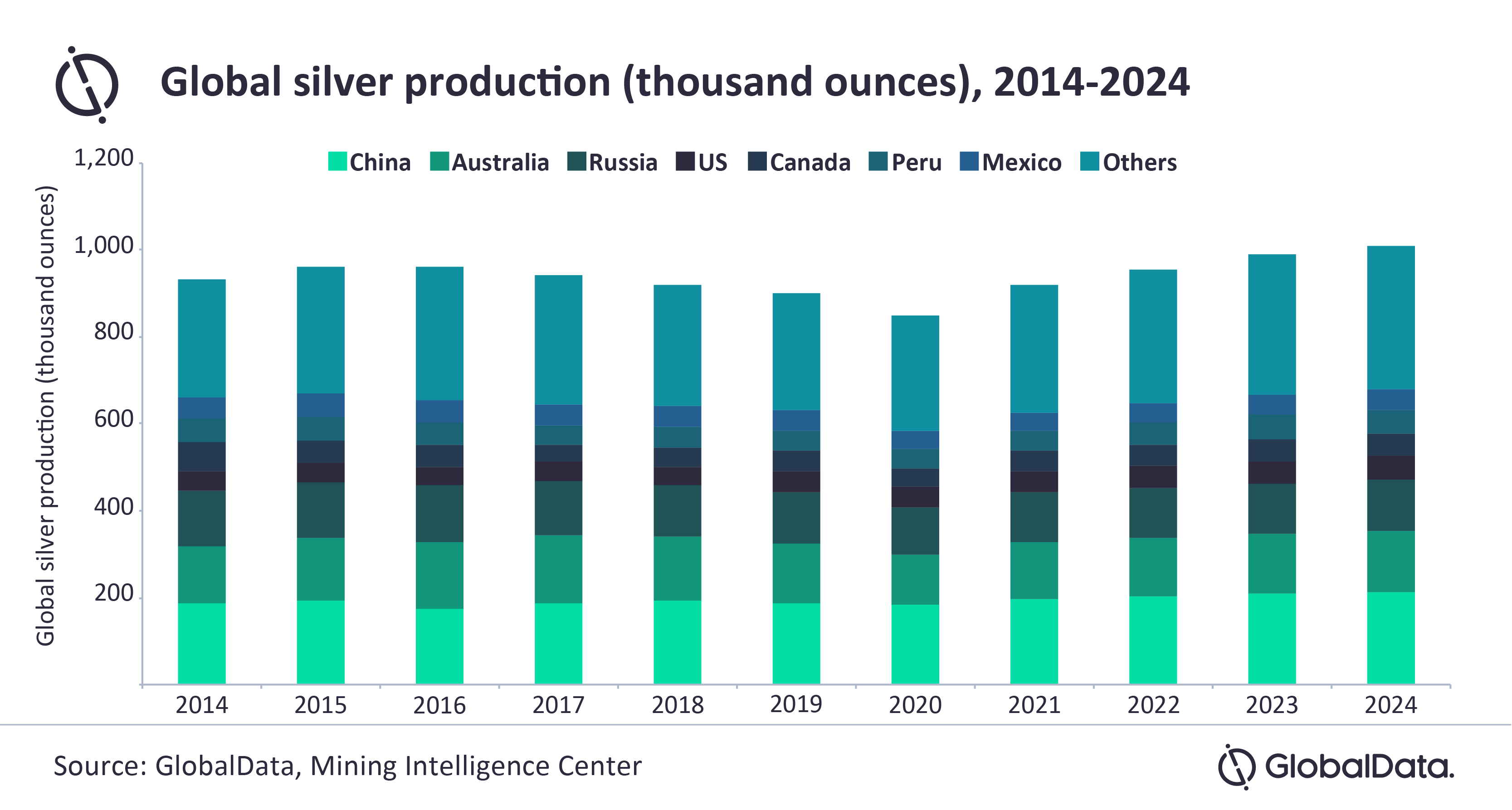 Mexico, Peru and China will be the key contributors towards silver mine production growth, with combined production in these countries expected to increase from a forecast 393.9Moz in 2021 to 443.9Mkoz in 2024.

The greatest impact from the COVID-19 pandemic on silver production was seen during the first nine months of 2020, when eight of the top ten silver producers reported a collective 13.9% year-on-year (Y-O-Y) fall in their output. Among those reporting significant falls in output between Q1 and Q3 were Pan American (6.8moz decline), Hochschild (6.4moz) and Compania De Minas Buenaventura SAA (6.3moz).

Vinneth Bajaj, Associate Project Manager at GlobalData, comments: “In Mexico, output was estimated to have fallen by 1.8% in 2020, with mining activities suspended for almost two months through to the end of May. Major silver producers in the country temporarily suspended their mining operations during this period and production losses were registered at Pan American’s La Colorada and Dolores mines, Fortuna Silver’s San Jose mine, Industrias Penoles’ Saucito mine and Hecla Mining Company’s San Sebastian project, among others.

“However, these COVID-19-related production losses were partially offset by higher production from other key mines, including the Penasquito, Guanacevi, Zimapan and Ocampo projects, as well as from the commencement of projects in 2020 such as the Rey de Plata, Capire and Tahuehueto projects.”

Production in Peru fell more significantly, down by an estimated 16% over the course of 2020, having declined by 29.1% y-o-y in the first seven months of the year. The Uchucchacua mine, owned by Buenaventura, was the biggest contributor towards this decline and silver output dropped by around 4moz in the first nine months of 2020 versus the same period of 2019. Further, operational suspensions at Pan American’s Huaron and Morococha mines between May and September also contributed towards the decline.

Bajaj adds: “Projects with potential to commence operations during the forecast period include the Corani project in Peru, which is wholly owned by Bear Creek Mining Corp. It has received all the regulatory approvals and permissions, with construction scheduled to commence in the second quarter of 2021 and production in 2024. In addition, the Fenix gold project in Mexico, wholly-owned by McEwen Mining, is currently undergoing a definitive feasibility study. The project’s construction work is scheduled to start by the end of 2021, with operations to begin in 2022.”