Six out of top 10 internationally visited cities in 2018 are from Asia, finds GlobalData

26 Sep 2019
Six out of top 10 internationally visited cities in 2018 are from Asia, finds GlobalData

Tourism friendly policies, low cost connectivity and weak currencies played a vital role in attracting international visitors to Asia with six out of the top 10 cities in terms of international visitor arrivals in 2018 were from the region, according to GlobalData, a leading data and analytics company.

Bangkok, Singapore, Tokyo, Hong Kong, Seoul and Shenzhen from Asia were among the top 10 destinations by international visitors in 2018.

Greater London and Greater Paris from Europe, Dubai from Middle East and New York City from America were the other cities that featured in the top 10 list. 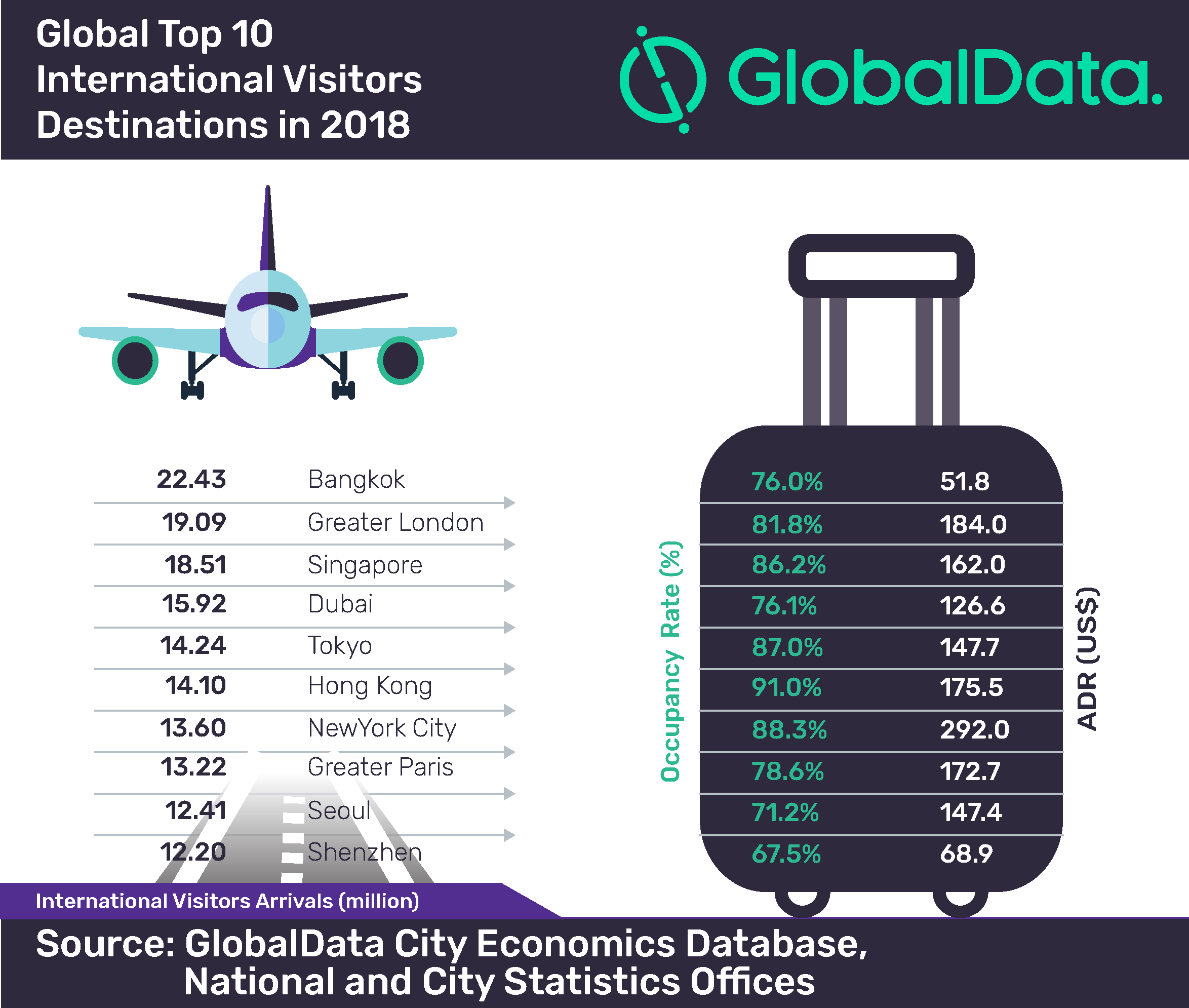 A total of 13.2 million foreign visitors visited Greater Paris in 2018. Cultural heritage, art, monuments and café culture were some of the main visitor attractions in the Greater Paris region.

Tourism sector accounted for approximately 9% of the total employment in Greater Paris region in 2018.

Dubai led the Middle East and North Africa region in terms of visitor arrivals. Visa on arrival and 30-day and 90-day free visa policy offered to countries, including China, India, Russia, the US and the UK, have significantly contributed to the growth of visitor arrival in Dubai city.

Among the top 10 cities, Tokyo exhibited sharpest growth of 60.5% during 2014-18. The growth of international visitor arrivals in Tokyo was aided by initiatives by the public and private sector to promote Tokyo’s tourism and create a welcoming environment for visitors, along with measures taken to relax visa requirements for foreign visitors from Asia and other regions.

Global destinations witnessed a huge influx of Chinese visitors while countries such as South Korea and Japan are also named as the key source markets.

Demand for China outbound tourism grew continuously in line with rise in personal disposable income. According to China National Tourism Administration (CNTA), outbound travel grew by 262% since 2008 and is expected to reach 166 million departures by 2019.

India, which has a large and increasingly affluent middle class, has huge potential as a key source market to the global destinations.

The Indian outbound visitors’ number has been growing at an average annual rate of 9.2% since 2008. According to the estimates by The United Nations World Tourism Organization (UNWTO), 50 million Indian tourists will visit global destinations by 2020.