Despite the effects of COVID-19 on global demand and supply, the outlook for South America’s offshore production is on track to surpass volumes coming from North America by 2024. While several projects in Brazil and Guyana have taken final investment decision (FID), and are less likely to be postponed or suspended, offshore US and Mexico tell a different story. Key projects in offshore US have already been delayed as a result of COVID-19 and the sharp decline in Mexico producing shallow water projects, though mitigated, will not be reversed by the slate of 13 planned and announced projects, according to GlobalData, a leading data and analytics company.

Effuah Alleyne, Senior Analyst at GlobalData, comments: “Delays and pending approvals will not help North America reverse its declining trajectory, as production is expected to drop by 15% over a period of 2022-2024. Improving the region’s trend will require a combination of factors not exclusive to better market pricing to support project economics, enhanced recovery for existing projects and the expansion of resource base especially in Mexico.  In addition, projects in the US and Canada have been bottlenecked by pipeline capacity and so increasing pipeline infrastructure will alleviate some of the issues faced.” 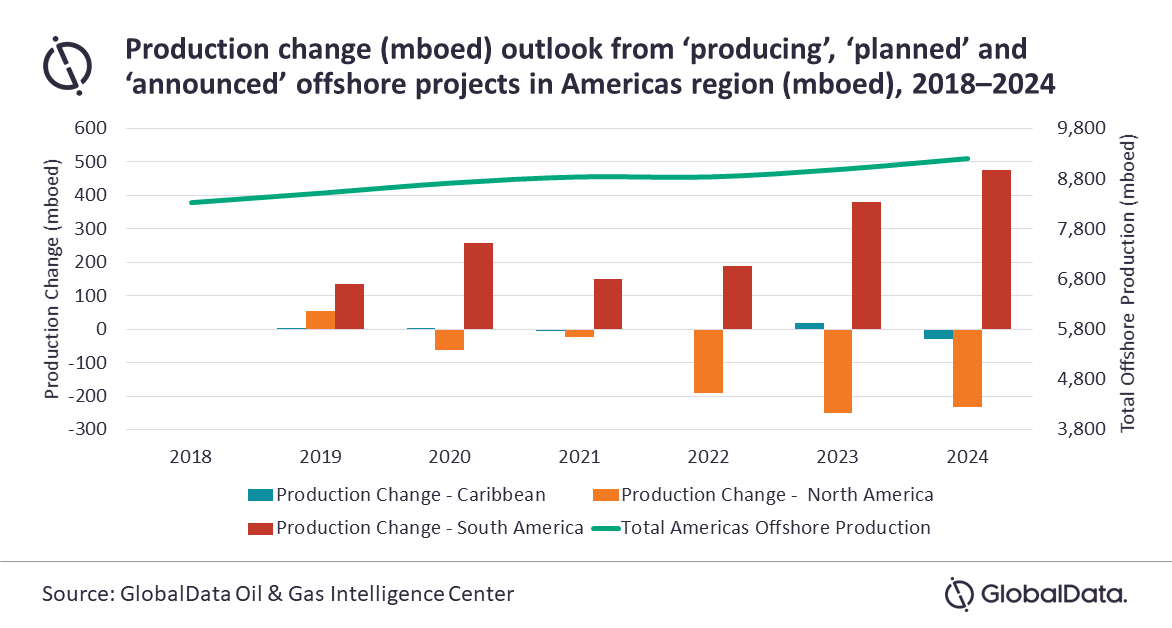 Largely due to the positive trend in South America, total offshore production for the Americas as a whole is expected to steadily increase from 8.65 million barrels of oil equivalent per day (mmboed) in 2020 to 9.15mmboed by 2024. This is particularly attributed to significant contributions by Brazil’s pre-salt area and newcomer, Guyana ultra-deepwater projects.

Alleyne continues: “Brazil’s prolific pre-salt region is surviving the industry downturn mainly due to the robust economics of its current and upcoming projects – a result of high productivity, high-quality crude wells. Projects in this region have breakeven oil prices as low as $35 per barrel (/bbl), compared to Brent’s current price averaging $40/bbl. In addition, national oil company Petróleo Brasileiro has steadily streamlined its portfolio to focus on exploration and production activities in the pre-salt layer, while divesting non-core assets in onshore, shallow water and post-salt areas.

“Guyana’s ultra-deepwater projects in the frontier Guyana-Suriname Basin have breakeven oil prices as low as $23/bbl, with short-term production expected to grow 10-fold by 2024 from projects such as Liza Phase 2.”