In terms of annual premium equivalent (APE), the United Kingdom (UK) pensions market size was valued at GBP13.9 billion in 2021. The market is expected to achieve a CAGR of more than 1% during 2021-2026. The growth will be slow across all years of the forecast period. Ongoing economic issues are expected to impact the unemployment rate as well as the amount individuals contribute to their pensions.

The United Kingdom (UK) market research report explores how consumers’ attitudes and behaviors towards long-term saving, planning for retirement, and accessing private pensions are changing because of the COVID-19 pandemic and economic uncertainty. The report also provides current and historical data on the size of the market by product type, covering individual pensions, workplace pensions, and trust-based pensions. Moreover, data on common retirement products (annuities and income drawdowns) is provided. 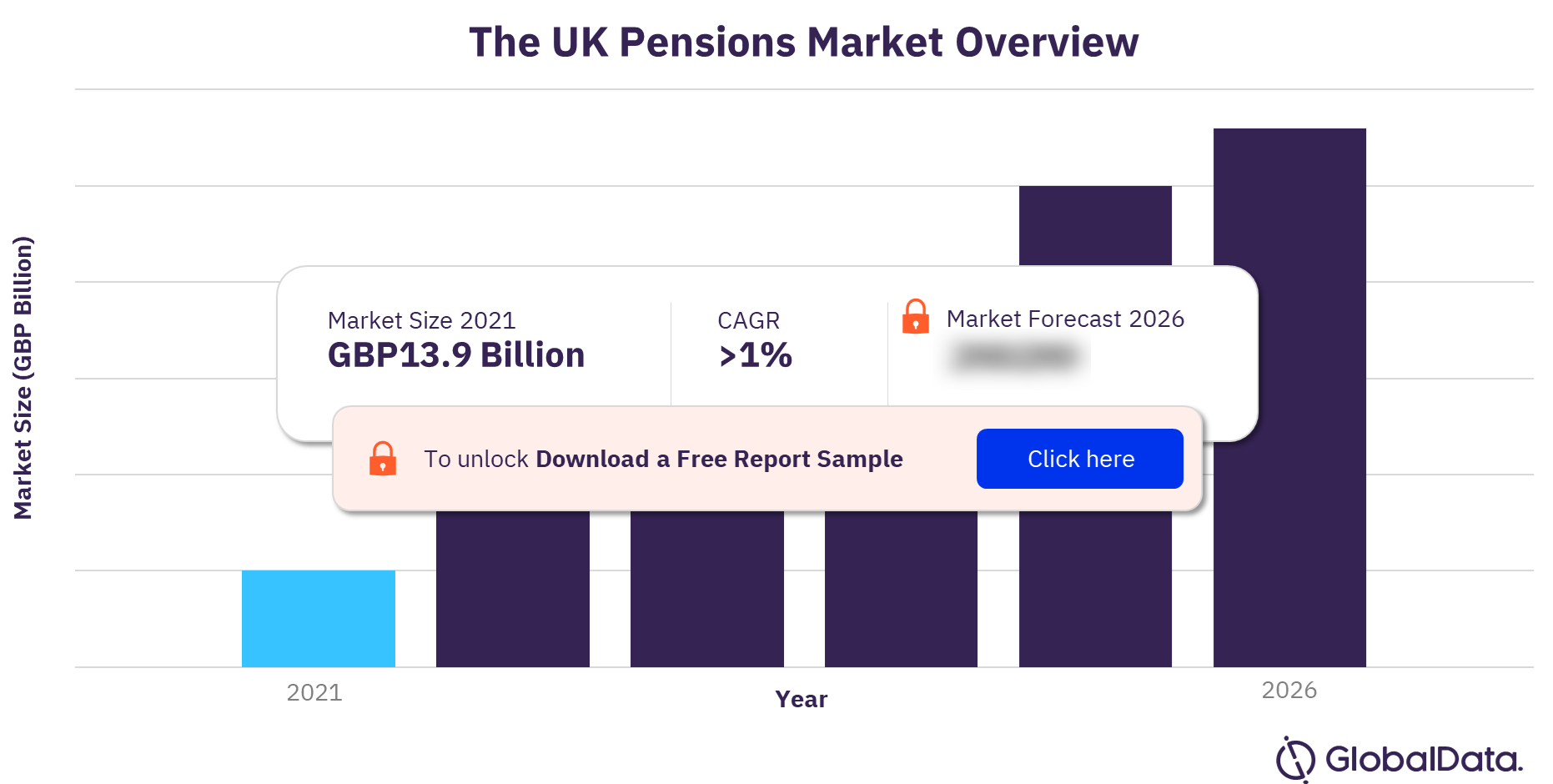 Pensions will be more easily accessible because of the development of dashboards. It will become more visible, allowing people to monitor their pension balances thereby reducing the number of lost pensions. This will make it easier for individuals to plan for retirement as well as for promoting client engagement.

Since the state pension is not enough to support a reasonable lifestyle in retirement, providers will need to keep raising awareness of the need to save for retirement. In addition, the cost-of-living crisis could lead some individuals to stop making contributions toward their pensions.

The key pension types in the UK pensions market include trust-based pensions, work-based pensions, master trusts, and individual pensions. In 2021, the overall growth of the UK’s pension market is largely driven by work-based pensions. The increase in the number of employees across the UK making contributions to workplace pensions drove growth for this type of pension. However, due to the government’s COVID-19 furlough scheme, some of the growth in workplace pensions was limited, as contributions made were calculated on a reduced wage.

For more insights on the pension types in the UK pensions market, download a free report sample

Some of the leading providers in the UK pensions market are BlackRock, Aviva, Royal London Mutual, Lloyds Banking Group, Phoenix Group, M&G, Fidelity International, Liverpool Victoria Financial Services, Zurich Financial Services, and NFU Mutual. BlackRock was the largest provider of individual and workplace pensions in 2020 and was followed by Aviva.

2. The State Pension and Retirement Planning

2.1 Upon reaching the SPA, the majority of individuals retire

2.2 The state pension is not enough to support a comfortable lifestyle

2.3 The rising cost of living is impacting retirement income for both non-retirees and retirees

3.1 Savings into pensions bounced back following a fall in 2020

4.1 Due to AE, more individuals are contributing to their workplace pensions

5.1 Many people over 55 making pension withdrawals are endangering their long-term savings

5.2 Accessing pensions for the first time

6.1 Retirees have confidence in their retirement funds

Table 8: Example of average retirement income through annuities, May 2019 to May 2021

Figure 2: Most individuals retire at around the SPA

Figure 3: The state pension pay of women is lower than for men

Figure 5: Adults who are not yet retired value the state pension less than those who are retired

Figure 6: Most individuals desire a retirement income of between GBP1,000 and GBP1,999 per month

Figure 9: Due to their longer life expectancies, women require larger pension pots than men do in order to have the same income in retirement

Figure 10: Non-retired individuals are more concerned about their retirement income covering their cost of living

Figure 11: 30-39-year-olds are most likely to say their retirement income cannot cover their living expenses

Figure 12: APE for all pension types except trust-based pensions grew in 2021

Figure 15: The pensions market is forecast to grow to 2026f

Figure 16: Growth in workplace pension participation grew once more in 2021

Figure 17: The majority of younger adults have started a workplace pension due to AE

Figure 18: Involvement in workplace pensions is incredibly low among individuals aged 16 to 21

Figure 19: A third of individuals would never opt out of their workplace pension, regardless of the contribution rate

Figure 20: There has been a shift away from DB towards DC schemes

Figure 21: Many adults consolidate their pension pots once they reach the SPA

Figure 22: 56.8% of individuals contribute at least 6% of their income to pensions

Figure 23: 98.7% of full-time employees make contributions towards a pension

Figure 24: The largest proportion of employers match the contribution of their employees

Figure 26: Over the course of their working lives, many lose sight of how much their pension is worth

Figure 27: A sizable proportion of individuals 55 and above have pension funds worth over GBP100,000

Figure 28: The pension pots of women approaching the SPA are smaller than those of men

Figure 29: Over 55s have flexibility in terms of drawing pension income

Figure 30: The largest proportion of over 55s withdrawing from pensions use the funds for everyday expenses

Figure 31: Most people delay claiming a pension in order to continue working longer

Figure 32: When a pension plan is accessed for the first time, more than half are completely withdrawn

Figure 35: The value of taxable flexible payments from pensions increased in 2021

Figure 36: More than 90% of people claim that their lifestyle after retirement is better than or as expected

Figure 37: Most retirees are convinced their pensions and savings will sustain them for the rest of their lives

Figure 38: Just under half of retirees review their budgets once a month

Add to Basket
Enquire Before Buying
Request a Free Sample