The UK is expected to drive the upcoming projects across oil and gas value chain in Europe, accounting for about 25% of the total projects which are likely to start operations by 2025. Amongst these, new build projects lead with 62% while the remaining are expansion projects mainly in the upstream sector (fields), according to GlobalData, a leading data and analytics company.

GlobalData’s report, ‘Europe Oil and Gas Projects Outlook to 2025 – Development Stage, Capacity, Capex and Contractor Details of All New Build and Expansion Projects’, reveals that 111 projects are expected to commence operations in the UK during the period 2021-2025. Out of these, 83 will be upstream projects, 23 will be midstream with refinery and petrochemical at three and two, respectively.

Soorya Tejomoortula, Oil & Gas Analyst at GlobalData, comments: “The shallow waters of the North Sea will continue to drive the growth of upstream production projects in the UK. The upcoming projects’ list has a good mix of both oil and gas developments and will help the country to continue to meet its oil and gas needs and reduce reliance on imports.”

Among the upcoming production projects in the UK, Rose Bank is a key project with a total production capacity of 121,000 barrels of oil equivalent per day. Proposed in deep waters of West of Shetland, the project will further enhance the UK energy security with supply of both oil and gas. 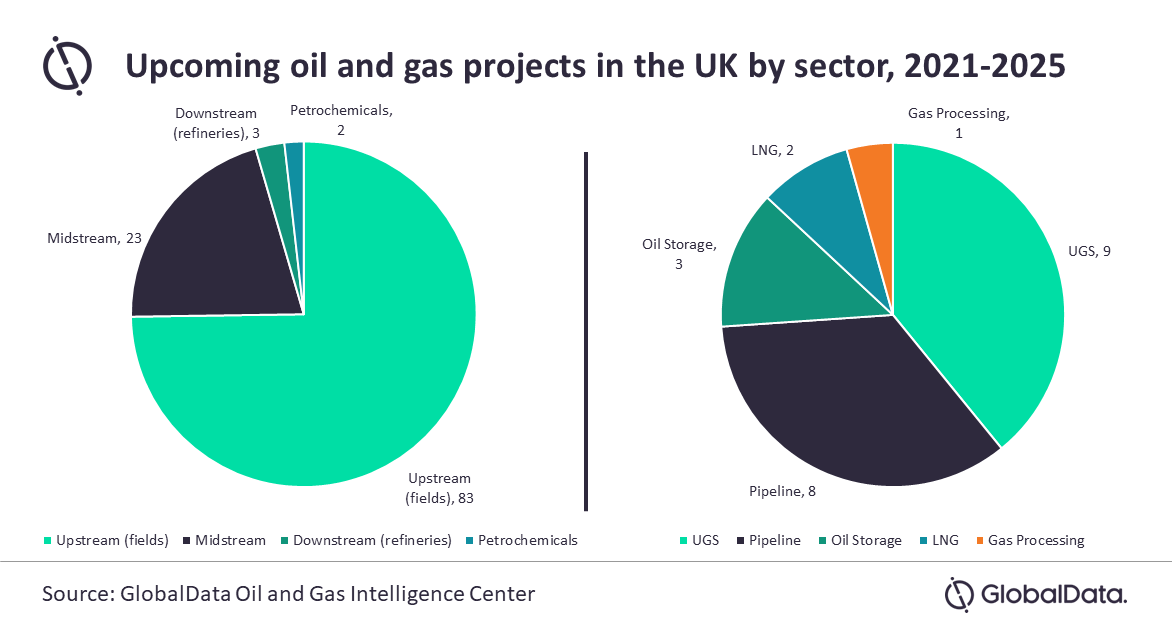 GlobalData notes that 23 midstream projects are expected to start operations in the UK during 2021-2025. Rosebank Export Line transmission pipeline is a key midstream project with a length of 236km and a project cost of US$2bn. The pipeline helps to transport gas produced from the Rosebank field to the UK onshore.

Deborah is another key midstream project in the UK for underground storage of gas. It is expected to have a working gas capacity of 174 bcf and a project cost of US$3bn. The project increases the country’s gas storage capacity and can serve both the UK and northwest European markets.

The capacity increase of Isle of Grain regasification terminal is also being planned with a cost of US$396m, which would make it the largest LNG import terminal Europe once it starts operations in 2025.

A few refinery and petrochemical projects are also expected to start operations in the UK during 2021-2025. While the 45MW Pembroke Cogeneration Plant Expansion is a key refinery project with a cost of US$170m, the INEOS Group Hull Vinyl Acetate Monomer (VAM) Plant 2 is a major petrochemical project during this period with a capacity of 0.30 mtpa and costing US$213m.