South Korea has earlier this year introduced the ‘9th Basic Plan for Long-Term Electricity Demand and Supply 2020-2034’ with a goal to increase the share of renewable energy in the energy mix from the current 15.1% to 40% by 2034. Against this backdrop, offshore wind power and solar PV will play a crucial role in reducing the country’s dependency on fuel imports for thermal power generation and achieving its climate goals, says GlobalData, a leading data and analytics company.

GlobalData’s latest report, ‘South Korea Power Market Size, Trends, Regulations, Competitive Landscape and Forecast, 2022-2035’, reveals that thermal power accounted for 64.4% while nuclear power accounted for 26.2% of the total electricity in 2021. Around 24 nuclear reactors were used to meet approximately one-third of its electricity consumption, with demand at its peak during midsummer when residential customers use home-cooling devices.

Attaurrahman Ojindaram Saibasan, Power Analyst at GlobalData, comments: “South Korea’s ability to handle domestic electricity demand effectively stems from its large thermal and nuclear power generation. Nuclear power is expected to continue to meet around 21.8% of the country’s electricity requirements (in terms of annual generation) until 2035.

“One growth opportunity for South Korea’s nuclear power sector will be in the form of technology exports. South Korea has recently been awarded a nuclear power project in the United Arab Emirates (UAE), which, if successful, could see it grow into a leading exporter of nuclear power generation technology.”

Saibasan continues: “Other growth opportunities in the renewable sector are specifically available in solar PV and offshore wind. Nearly 40% of the projects currently in the pipeline are in the offshore wind segment.” 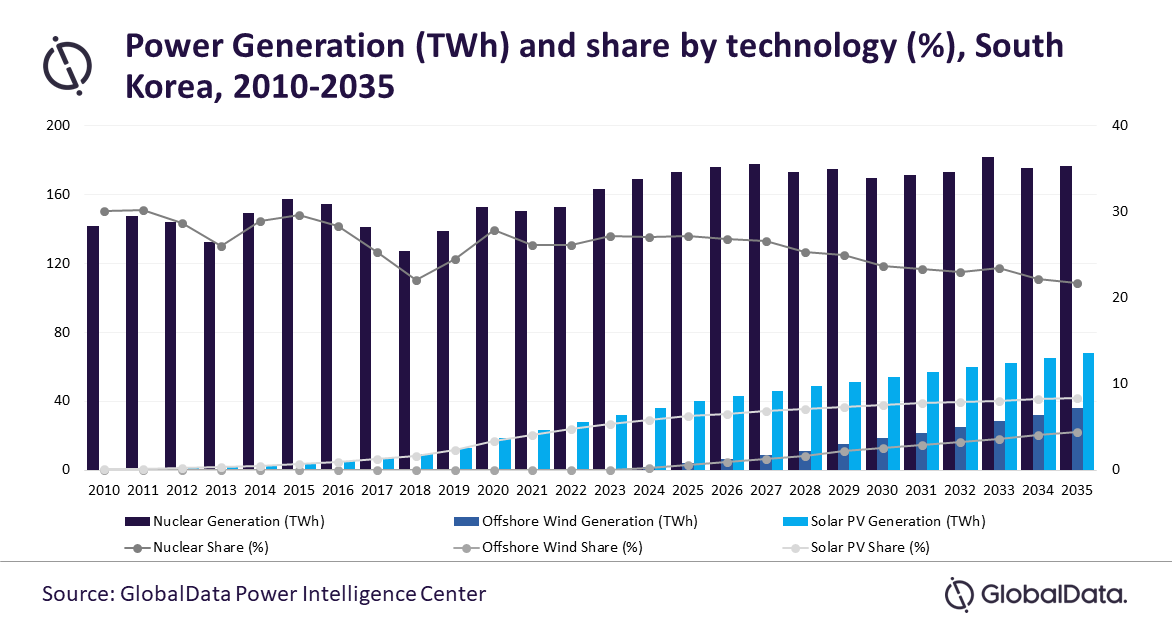 South Korea plans to build the world’s largest offshore wind farm by 2030 with an estimated capacity of 8.2 GW. It aims to be a leader in this field and has already started to adopt the technology in a way that suits its needs and economics.

Saibasan concludes: “The share of solar PV in the total power generation is expected to increase from 4.1% in 2021 to 8.4% in 2035. In October 2020, South Korea announced its goal to achieve net-zero emissions by 2050. In line with this goal, the government aims to build 12 GW of offshore wind capacity and 34 GW of solar PV capacity by 2030.”